The Red Carpet: Hide and Seek

It’s a boost for any brand to get a shout-out on the red carpet — shoe designers just wish they’d get a little more visibility. 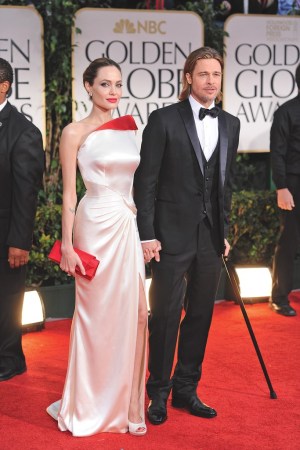 A Footwear Icon Is Making a Comeback: Scholl’s Wooden Clog

At last month’s Golden Globe Awards, Charlize Theron wore a soft pink Dior Couture gown, a vintage Cartier diamond bandeau in her hair and a jeweled brooch at her waist. While the dress’ ultrahigh slit allowed her to show some serious leg, it also brought major attention to her Givenchy sandals.

The next morning, nearly every photo of Theron also prominently featured her shoes — too bad those Givenchys were practically the only shoes so visible on the red carpet.

Even though many shoe designers actively participate in the race to get their designs on the stars, they don’t often get the credit they deserve because their creations are too often covered by the floor-length gowns and overshadowed by the glitzy diamonds the celebrities prefer to give credit to when talking to reporters.

“We shoe designers’ greatest nightmare is the long dress,” said Stuart Weitzman. “It’s a true obstacle because it covers the gorgeously designed evening shoes, as well as the actress’ memory of wearing them.

“I got tired of the media always asking about the dress and jewelry only on the Oscar red carpet, so that’s exactly why I started to create footwear that demands a spotlight of its own, back in 2002,” Weitzman added, referring to his “Million Dollar Shoe” initiative, which made its debut at the Academy Awards in 2002 featuring 464 diamonds. This year marks its 10th anniversary (albeit with a more affordable remake of the original shoe called the “Millionairess,” which features Swarovski Elements and is available at Weitzman boutiques for $595).

Stylists, for their part, are well aware of the dilemma, and most agree that shoes are the unsung heroes of the red carpet. After all, if the shoe fits and the celebrity feels good, she is likely to feel more comfortable on the walk, and she may even be more inclined to flash her heels here and there.

“I always treat the shoe as equally important as the dress and jewelry, the hair and makeup, but I have to say that it often gets overlooked,” said celebrity stylist Tanya Gill, who works with Hilary Swank, Jane Fonda, Minnie Driver and a gaggle of young English actresses. “It’s a shame. But if the shoe looks amazing — and you can see it — it will get great press.

“If the shoe fits and you feel great and the client is happy, they walk differently,” she added. “I find that if they’re really happy with the whole look, they are more likely to show that shoe than just having it tucked under the dress.”

Stylist Jennifer Rade, whose clients include Angelina Jolie, Pink and Cher, noted that finding the right shoe can be a major project.

“Sometimes I feel I need to start my own shoe line, because it’s hard to find the really simple shoe, and the right heel height for the dress, and you want the actress to be comfortable,” she said. “I spend time calling everyone from Giuseppe Zanotti to Jimmy Choo, to Christian Louboutin and Cole Haan to find the right shoe, and sometimes it makes me sad because you have this great shoe and then, in 15 pictures, only see the tip of it,” she says. “I am always scrolling through pictures to find the great shoe shot. I appreciate that designers loan them so much, [and] I want them to be credited — no matter if people are able to see them or not.”

Jolie, for her part, accessorized her white Versace goddess gown with white heels from the Italian fashion house — and she let them peek out from beneath her hem for some of the photographers.

Brian Atwood, whose shoes have adorned stars from Cameron Diaz to Anne Hathaway and Amanda Seyfried in past red-carpet moments, says his fantasy is to see a pair of “killer shoes” peeking out from beneath a long gown on the red carpet.

“Don’t get me wrong,” he said. “There is a part of me that fantasizes about Hollywood’s leading ladies walking the red carpet in short dresses that let the shoes take center stage.”

While long dresses continue to dominate at awards ceremonies, recent fashion trends could bode well for the shoe — perhaps even as soon as the upcoming Academy Awards on Feb. 26.

“The statement shoe is getting bigger — just look at the incredible shoes Miuccia Prada did for spring,” said stylist George Kotsiopoulos, best known for his turn as a commentator on the E network’s “Fashion Police.” He added that the recent trend for cutaway hems should also boost shoes on the red carpet. “I saw them at Oscar de la Renta, Michael Kors and several other designers. You have to just hope that several actresses will be wearing mullet dresses on the red carpet this season.”

Even if they don’t, some shoe designers are content just to be considered.

“Everyone looks to what designers their favorite starlets wear, so when a celebrity chooses to wear Casadei, it validates the brand to the public in an impactful way,” said Casadei creative director Cesare Casadei, whose shoes were worn by Julianna Margulies to the Screen Actors Guild Awards late last month — but were completely covered by the Calvin Klein Collection dress she donned for the occasion. “We are always flattered when she chooses Casadei for her big red- carpet moment — [whether] the dress covers the shoe or not.”