The Return of Patrick Cox

The shoe designer and longtime Vivienne Westwood collaborator was incentivized to relaunch his company after seeing a resurgence of clunky loafers on the runways.

Patrick Cox has been seeing shades of his loafer designs from the Nineties grace runways for a few seasons, and with that, decided to jump back in the game.

Cox, a onetime party fixture in London who spent a better part of the Eighties collaborating with Vivienne Westwood, had built a career on the kinds of chunky, square-toe loafers that have suddenly fallen back into favor.

This fall, his name will yet again appear on store shelves with some 30 new designs for men and women based on Cox’s Nineties originals.

Clunky loafers have recently become mainstays of collections by Gucci, Martine Rose and the English streetwear brand Palace. “I feel like everyone is inspired today and I felt like I would rather just track down the original — if I wanted rock-‘n’-roll jewelry, I’d just track it down,” Cox said of his drive to get back in business. 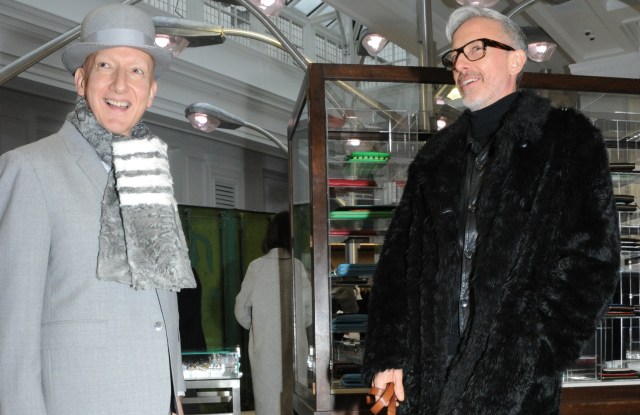 Since leaving his namesake brand in 2007, Cox rode out a three-year noncompete, operated an S&M-themed bakery and worked as the creative director of Geox for five years. One day he woke up in London, “after 35 years, and realized I don’t use the city anymore. I was going to the same five restaurants and thought I wanted to try something else — a life that’s just me and my dog.”

He packed up and moved to Ibiza, where he is learning Spanish and goes “to the beach every day, but not the clubs or parties,” Cox noted, reassuring that he has moved on from his raucous, early days in London.

The designer says he has no intentions to re-create the kind of business structure he once oversaw. “I had the big company, I had the 200 employees. I have no desire for any of that. I’d like to live full-time in Ibiza and pop over [to London] and still be in charge of design,” he proclaimed.

Hence why Cox has partnered with Six London for the production and distribution of his new label. The company has slowly been building a roster of specialty shoe brands including Nicole Saldaña and Dorateymur, as well as crafting footwear for fashion-forward labels such as Martine Rose and Toga Pulla.

Colorful leather loafers, some with heels and others flat, each come inscribed with “By Mr. Patrick Cox” on their footbeds. The designs will be priced from $275 to $350 at retail, with Six London taking market appointments in New York this week — aiming for a fall release. All product is produced in Portugal.

Cox felt it important to keep prices on the accessible end of the spectrum. “Unless it’s something that really moves the earth for me, I’m not spending thousands per garment or shoe. With the Zaras of the world just doing everything so well, I’m not into disposable fashion, but there is no need for things to be so expensive,” he said.

The decade in which Cox’s original designs flourished has become a boon of inspiration for Millennial-friendly trends. His original collaborator, Vivienne Westwood, is even seeing a resurgence on the resale market — with trendy vintage stores now seeing fast sell-throughs of her designs from the Nineties.

Cox feels the Nineties continue to resonate because “it was the last hurrah of realness,” he said. “After that, the supergroups came along and the ideas of brands having a musical chair of designers. People are so used to the Instagram hype and how things are manipulated to sell out. So I think there is authenticity to the Nineties. I even hate the word now because we hear it so much, but there was an authenticity to that period that evaporated quickly afterward.”