The Rise of the Slip-on Sneaker

Ballerina flats have pirouetted out of the picture—at least where the front row is concerned. 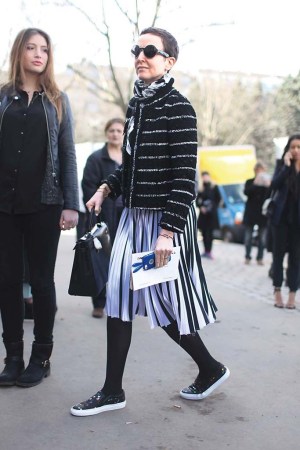 Ballerina flats have pirouetted out of the picture—at least where the front row is concerned. In their place, slip-on sneakers ruled as the comfort shoe of choice among numerous editors and retailers at Paris Fashion Week.

Grace Coddington, creative director of American Vogue, is no newcomer to sneaker chic and credits Céline’s Phoebe Philo for popularizing the style. Coddington reckons she owns about 15 pairs of them. “They sort of make everything look modern,” she mused.

“I think they’re chic enough to wear to the fashion shows, and they’re really comfortable,” enthused Christiane Arp, editor in chief of German Vogue. “It’s almost like a facelift when you wear sneakers. The attitude is a younger one.”

While the style in question, defined by a thick rubber sole, is often associated with Vans and the skateboard scene, most show goers prefer designer versions, particularly ones by Céline, Prada and Saint Laurent—and usually in black.

Art director Ronnie Cooke Newhouse also counts about 15 pairs. “I hate laces,” she explained, noting she has Céline versions in ponyskin and lizard, among others. “I even introduced my friend Pharrell Williams to them. He wears them.”