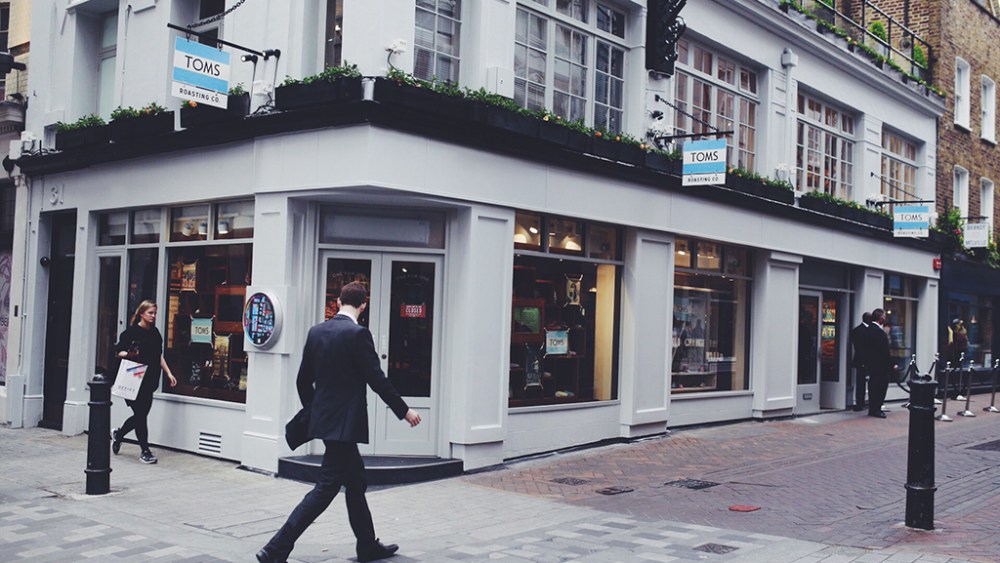 Toms opened its second European store Wednesday, a space on Foubert’s Place off London’s Carnaby Street, which the brand bills as a “Community Outpost. “The 1,862-square-foot, two-story space has its own coffee shop — serving up cups of the label’s own Toms coffee – and offers free Wi-Fi and sofas to perch on.

“You can buy anything online,” said Blake Mycoskie, founder of Toms, reasoning that when the footwear and accessories brand opens a store “you have to…give people more of an experience than just buying something.”

But there’s also plenty of Toms’ products — including footwear, eyewear and bags — on display in the space, which spotlights design details such as rough-edged wood and metal shelving and kilim rugs. “We really try and keep a simple, humble feel…no fancy fixtures or anything, because that’s how we started,” said Mycoskie.

The London store follows the opening of a unit in Amsterdam in early 2014, with Mycoskie noting that he’s also looking for stores in European destinations such as Berlin, Stockholm and Paris.

He’s currently on a monthlong press tour in Europe, boosting the visibility of his ethical label, which for every pair of shoes it sells gives a pair of shoes to a child in need. And Mycoskie said that the brand’s one-for-one philosophy has struck a chord with young consumers in the U.K.. ”Our younger customers…are really idealistic, and very much wanting their purchases and their consumption to be more conscious,” he said. The U.K. counts among Toms’ top three markets, along with South Korea and the U.S..

That said, Mycoskie acknowledged that some customers are drawn simply by the shoes’ aesthetics, which the brand is developing by expanding the collection each season. For spring, there are wedge-heeled booties, sandals and flip-flops, while this fall Toms will add boots designed for wintery conditions, with the latter styles having been in development for the last 18 months. “It has been challenging,” said Mycoskie of launching cold-weather styles. “We had to bring in new designers and new expertise.”

The store also carries Toms eyewear, which the firm launched in 2011, with the premise that it will provide those in need with an eye exam and appropriate treatment for each pair of sunglasses purchased, along with its bag collection, which launched earlier this year. In the case of bags, for every bag purchased Toms provides the training and materials to help more pregnant women in developing countries have a safe birth.

Since Bain Capital took a 50 percent stake in the company last August, the label’s expansion has ramped up a notch, with Mycoksie saying that the deal had “changed [the business] for the good.”

“We have a lot more resources now, to continue to grow the business and do things like retail, which are capital-intensive,” he said. “I think Bain also brings a lot of great analytics and discipline and rigor which I think is good for a company that’s growing,” he said.

Speaking during the Berlin leg of his tour, Mycoksie added that the decision to sell the stake “was a very personal decision.”

“I reached a point where I was feeling quite lonely, to be honest,” he said. “I owned 100 percent of the company, all the big decisions landed on my desk. The business was getting more complex, we were going into retail, we were growing globally. We were having a lot more manufacturing all over the world,” he related. “Things that I really have very little experience in.”

Now, Mycoskie said, “the decisions [are]….not just mine,” adding that the deal “hasn’t hampered the creativity, but has allowed us to think more strategically.”

Looking ahead, Mycoskie said he’s plotting more design collaborations for fall 2016 (Toms currently has a collection out with Christy Turlington’s non-profit organization Every Mother Counts, and in the past has worked with The Row and Tabitha Simmons) and said that he’s zeroing in on the sustainability of Toms’ production.

“We’re not leading by any means in that area, and I think we can learn from Nike or other companies that have really developed materials that are much more environmentally sustainable,” he said. “We tested a couple [sustainable materials] and frankly, they just haven’t worked, whether the dye doesn’t work with it, or durability hasn’t been good…I think the footwear industry itself has a very long way to go, and Toms is very much on that case,” he said.