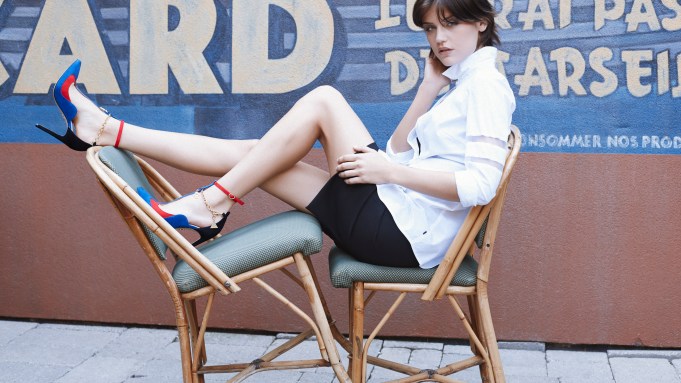 Elle AyoubZadeh has been quietly building a luxury direct-to-consumer footwear brand she hopes will be around for the long haul.

In doing so, the founder of Zvelle is self-funded and focused on the strategy of seasonless collections with little markup by selling direct to consumer. Zvelle on Tuesday launches a red carpet-inspired collection of five styles to be rolled out at a rate of one per week and priced from $350 to $450, a slightly higher price point than its existing footwear offering.

The impetus for the collection came from the more recent growth in celebrity and other influencer clientele for the company.

In March of last year AyoubZadeh designed a pair of custom shoes for Sophie Gregoire Trudeau, wife of Canadian Prime Minister Justin Trudeau, to wear to the White House for the first state dinner held for a Canadian in 20 years. The shoe ended up drumming up more interest and business for AyoubZadeh from other celebrities asking for shoes to match their own dresses.

“Because we’re a direct-to-consumer brand we’re in regular conversation with our customer and we get a lot of feedback on what they want,” AyoubZadeh said. “One thing we were missing was shoes that she could wear to special occasions. I wanted to do something very, very special and meaningful so these latest shoes I designed are the most personal shoes I’ve ever designed.”

The inspiration for the collection comes from a charm bracelet AyoubZadeh’s parents gave her when she was 13 with some of the shoes in the collection featuring anklet-like designs with charms floating from them.

“The whole idea is to give our customer something we weren’t giving to her before and it also allows me to have shoes that we can give to our top clients or VIPs,” AyoubZadeh said.

Zvelle’s shoes are currently made in Brazil and sold through its online store as well as a pop-up shop at the Yorkdale Shopping Centre in Toronto where customers can come in and try the shoes on as well as purchase them. Customer information such as size or their last purchase is easily accessible for store associates.

The company’s largest market is Canada, where it was founded and based, but it’s also shipped to the U.S., Australia, New Zealand, Ukraine and Germany among other places.

AyoubZadeh also has aspirations of expanding the brand out to other categories, with accessories being the most organic transition, but she’s measured in her growth plans.

“I’ve always had a very nimble approach to my company,” she said. “I’m the designer but I’m also the ceo. It’s a self-funded company so I don’t have huge venture capital funding, so I don’t have to answer to quarterly results and that gives me the opportunity to be really mindful about our production numbers and how we want to do things. We’re trying to build the next modern luxury brand.”

She’s also carefully weighing her options at wholesale having been approached by a few retailers and recognizing such deals could help her expand to the global customer she’s trying to reach, which she described as a global citizen and someone whose identity is not defined by any one country. She uses herself as an example of the Zvelle target client having been born in Iran and lived in Dubai, New Zealand, Australia and now Toronto.

“I don’t necessarily identify as one nationality. If you ask me what I am, it depends on which sport team is playing,” AyoubZadeh said. “So I’m a citizen of the world and my woman is somebody who has that global mind-set. She’s open to the world and in turn the world is open to her.”

The Science Behind Influencer Marketing