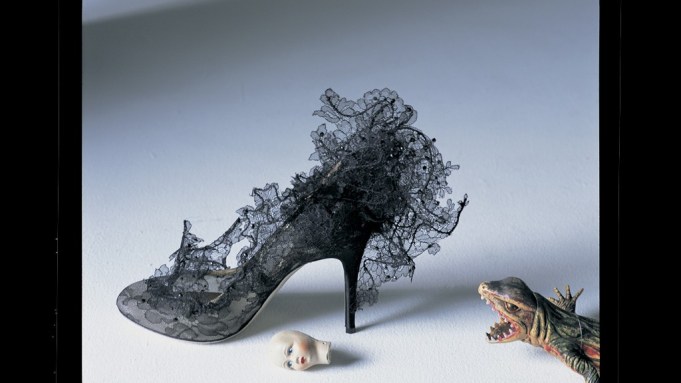 PARIS — Bunches of flowers, rather than limbs, poke out of lace boots. A studded handbag and a clutch shield the intimate parts of a woman, apparently not so skilled at strip poker.

These are among images in “Valentino: Objects of Couture,” a new tome in which cutting-edge photographers and artists were given carte blanche to capture the accessories output of Maria Grazia Chiuri and Pierpaolo Piccioli, who joined the Roman house in 1999 to do bags and shoes, rising to become creative directors in 2008.

Chiuri said of the 200-page Rizzoli book, which Valentino plans to launch Oct. 1 at a cocktail party during Paris Fashion Week: “It’s another point of view.”

From Nobuyoshi Araki’s ghoulish vision — an armless doll hung by the neck from the handle of a black leather bag — to Philip-Lorca diCorcia’s day in the life of a suburban nudist in stilettos, the 300 or so accessories pictured are far removed from their usual context of runways and fashion seasons. Yet Chiuri argued that diCorcia’s images in particular, with their heightened sense of modern life, speak to the fact that accessories, like clothes, reflect what’s going on in today’s world.

“There’s a moment when everyone wants one accessory,” she said. “I think accessories give that sense of time.”

Douglas Gordon, Luisa Lambri, Duane Michals and Amsterdam-based duo Scheltens & Abbenes were also invited to interpret bags and shoes from across 13 years of Valentino collections, while David Bailey took a portrait of Piccioli and Chiuri, both dressed in black suits.

Art curator Francesco Bonami wrote an introductory essay that draws links between contemporary art and Valentino accessories, such as a “soft” light switch by Claes Oldenburg and a glossy hobo.

In an interview, Piccioli and Chiuri mused on how bags and shoes have accrued both business and creative importance.

“We started with accessories more than 20 years ago, when accessories were not so fashion,” recalled Piccioli, who worked beside Chiuri at Fendi before moving over to Valentino.

When the duo took over couture and ready-to-wear at the Roman house, they decided to apply a high-fashion approach, expressing the essence of the brand without logos or other common codes. “We understood the couture is about details, and it’s the same with accessories,” Chiuri related.

While the contributors were free to choose from a broad selection of the archive, several of the duo’s “greatest hits” are represented, including Petale leather bags sprouting giant roses and Rockstud shoes with the same spikes that stud the spine of the book.

The company has frequently touted its high growth potential for accessories, which currently represent about 45 percent of the business, versus 30 percent in 2009.