Vibram, the premium shoe sole producer and performance footwear brand based in Italy, is making a push for renewed awareness.

On May 17, Gamberini along with Vibram’s owners the Bramani family, marked the opening of a new 4,000-square-foot experiential store situated in the middle of Boston University’s campus at 840 Commonwealth Ave. While Vibram has a marked presence in the U.S. as the exclusive producer of shoe soles for the U.S. military, the company now hopes to grow its resonance among young people. Its new store is intended to help increase awareness among local Millennials and serve as something of a talent incubator for BU’s engineering students. The company operates a Massachusetts manufacturing plant that employs some 300 individuals who fulfill Vibram’s U.S. military contract.

“Boston is very wealthy with colleges spread throughout city. The young population is around 255,000 students in Boston plus normal residents. The colleges are pretty experimental with fashion, we know they are trend followers and trend creators. As early adopters they can spread the voice of our brand. That’s why we are having a location like this in the heart of Boston University rather than being on Newbury Street where it’s very touristic,” Gamberini said of the store. 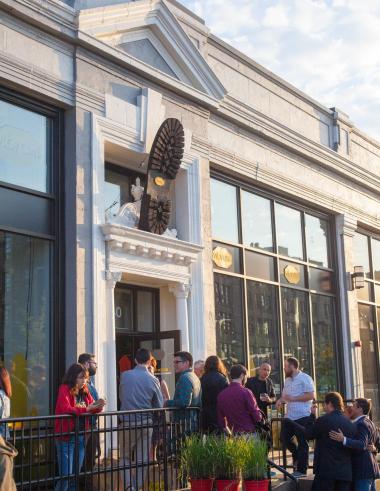 “We prefer to be in the university setting so students can see and observe and contribute. The professors are really getting students inside and we have established a system where they can get a credit by participating on our tester team or at our design work station,” Gamberini added of the store’s community outreach program.

The “Consumer Experience Center” as it’s been called, offers consumers the opportunity to test Vibram’s various performance products. The brand’s ice-gripping shoes can be tested on real ice, its FiveFingers running shoes and Furoshiki wrap shoes can be used on a climbing wall and running track and its hiking boots can be tested on gravel. Vibram is also testing an in-store cobbler program where consumers can bring any shoe to be resoled with Vibram outsoles, a service priced from $25 to $40.

“We wanted to create a different experience, not a typical retail store. The idea of the space is to give the consumer an idea of what our brand is all about,” Gamberini said.

The executive has set forth three major objectives for the company’s growth. Firstly, he looks to “develop the equity of the Vibram brand. We are known in certain athletic communities and now is the time for us to invest further in the brand itself,” he said.

He hopes to, “appeal more and more to the younger generation — lots of people my age know Vibram but the younger consumer has less awareness,” while also developing micro-communities of Vibram devotees at climbing centers and in ice sports settings.

In recent months, Vibram has made an increased push for “more global collaborations with brands from Japan, Italy and China. The more we can get on a global scale, the better,” Gamberini said, noting the company currently works with some 1,200 brands. New higher-profile partnerships have led to hybrid hiking boots created with high-end streetwear label Alyx and some premium spins on classic footwear, like Converse sneakers featuring durable Vibram soles.

“The general positioning of shoes with our sole is that it’s a brand within a brand — it’s like buying a car with subzero tires. Consumers are willing to pay an extra price because they receive the technology,” Gamberini said.

Gamberini’s final push toward modernization is an increased focus on sustainability, noting: “It’s very important for us to make developments through recycled material; we want to go more into an ecofriendly set of elements as one of our goals for the future.”