Family, friends and industry associates gathered Thursday morning at the Church of St. Ignatius Loyola in New York to celebrate the life of Vince Camuto. 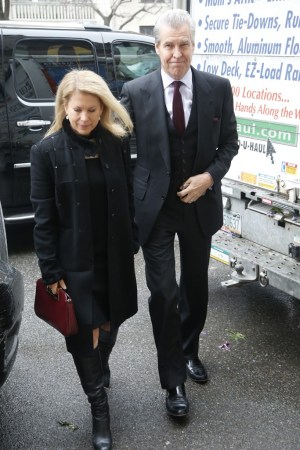 Burch joined Alex DelCielo, president and chief operating officer of Camuto Group, and Robert Camuto, Vince Camuto’s eldest son and a journalist and author, in delivering a eulogy that was filled with memories of Camuto’s generosity of spirit and passion for his family, friends and the business.

Burch, who partnered with Camuto in manufacturing her footwear, reflected on the deep friendship they developed.

“I met Vince over 10 years ago when I opened my first boutique,” recalled Burch. She said Mercedes Castillo, creative director of Tory Burch, brought him into a one-room office, and he looked at the line and concluded, “we had a lot of work to do, and he thought he could be of help.” She called Camuto “an extraordinary partner, a visionary” with “an incredible eye.” She would present to him 100 pairs of shoes in a room, and he would be able to pick out the bestsellers and he was “always right.”

Describing his “utmost integrity” and “infectious joie de vivre,” Burch said she will never forget the twinkle in Camuto’s eyes, nor the time they were in St. Barths and he saved her mother’s life when she danced off the top of the table — forever forging a bond between them. “He treated everyone like a member of his family,” said Burch, getting choked up. “The way he spoke about all of them with so much love and pride, it was extraordinary.”

Burch recalled that Camuto would always say, “if you’re not passionate about what you do, find something else.” She called him her “most trusted adviser,” and he would always show such encouragement and say that things will be fine and move on. “He was always right. He was one of the most optimistic people I knew.” He would also tell me “life is too short,” and he was right, she said.

DelCielo said that Camuto didn’t have employees, “he had students.” DelCielo has only worked at two companies in his career — Nine West and Camuto Group — and said that Camuto gave him opportunities he never could dream of. “He mentored me so I’d be successful in every opportunity,” he said. Camuto would always tell him that “it was about the people, and his legacy is the people,” he said. “He was my mentor, teacher, brother and best friend. I will miss him,” DelCielo said.

Robert Camuto said his father died exactly how he wanted to, at home in Greenwich, Conn., surrounded by his five children and his wife, Louise. “Our dad had soul, a lot of soul,” which caused a ripple of laughter in the crowd. Hundreds of people have been moved by his kindness and charisma, he said. “You could see his soul shine through his eyes. That Vince-ness,” Camuto said. He said that one of his father’s greatest expressions was his humility. “He never forgot that he was a fatherless kid from 10th Street,” Camuto said. He said that more people considered him his brother than anyone else.

“Vince Camuto’s life was one heck of a ride,” he said. He noted that at 78 years old, his father still considered himself young. He recalled that his father would say that he’d trade everything for another 20 years. “He’d start over from scratch with a T-shirt and a pair of jeans,” said Camuto. He spoke about his father’s favorite music — the soul music of Barry White. He said that his father wanted to share, to live and to love all the way, and he encouraged people to take their passions and talents to the next level “and let the music play on and on and on.”

In his homily, Father Thomas Feely spoke about Camuto’s passion, his ability to see the potential in people and his desire to help people fulfill their potential. “There are a million ways of loving, and Vince had a huge and rich repertoire,” he said.