The sneakers, easily the brand’s most unusual launch, are designed in collaboration with socially responsible shoe brand Twins for Peace. 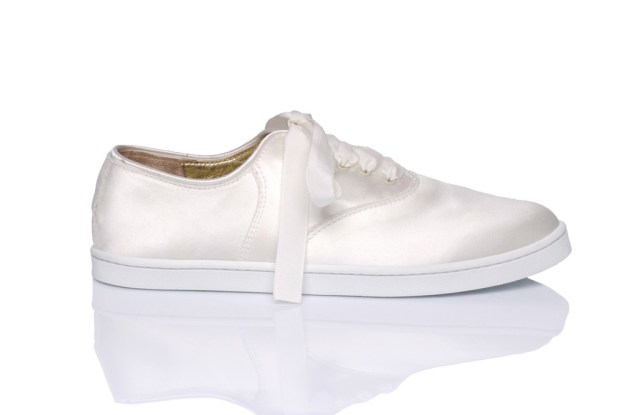 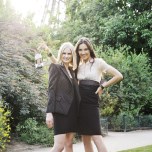 PARIS — Enthusiastic brides can now literally skip or trot down the aisle — at least as far as their footwear is concerned.

Vouelle, a shoe collection started by two Americans in Paris, is gaining momentum with the launch of its first pre-collection and several bridal collaborations in the works — including satin bridal sneakers.

Founded in February 2008 by Melissa Regan de Vogele and Michelle Boor, Vouelle began life as a couture bridal shoe collection, but has since expanded to include cocktail and city shoes and the capsule Vouelle Voyage line.

The sneakers, easily the brand’s most unusual launch, are designed in collaboration with socially responsible shoe brand Twins for Peace and went on sale in spring.

“The response has been great. I was pretty surprised,” said Regan de Vogele, chief executive officer of Vouelle.

The shoes appeal to atypical brides and those looking for a second pair of shoes to wear before or after the ceremony.

“A lot of brides buy them to wear them on the morning of their wedding, when they’re getting their hair done and they’re wearing their white Juicy sweatpants,” she noted.

A San Francisco native with an M.B.A. from Pepperdine University, Regan de Vogele entered the shoe business after seven years of working in finance. She had studied in France during college and came back to live here, and married a Frenchman. She met Boor at a Paris gym about 10 years ago. They both got married in 2007 and spotted a gap in the bridal segment. Regan de Vogele asked Boor to come on board as creative director.

Boor, who hails from Salt Lake City, studied at the Fashion Institute of Technology and Parsons The New School for Design, before working under Alber Elbaz at Guy Laroche and for contemporary brand Theory in New York. But neither woman had any know-how or experience in the shoe field when they started out.

“If you knew everything, you would probably never take a first step. Ignorance is bliss,” said Regan de Vogele with a laugh. “We’ve done everything on, really, a shoestring budget.”

For their first steps in the closed world of Italian shoe manufacturing, they enlisted the help of Alain Mancini, the son of shoe designer René Mancini, who provided contacts and technical advice.

The pair have now expanded production to Spain and Portugal, and used their growing manufacturing expertise to make their price positioning more affordable. The average price of a pair of Vouelle shoes is now 340 euros, or $485 at current exchange, down from around 550 euros, or $785, when they started out.

“What we’re trying to do is really designer luxury, but accessible and intelligent, and bringing interesting product to market with the finest quality materials,” said Regan de Vogele.

“Each production we go into is between 500 and 1,500 pairs of shoes,” she added, noting there are five to six production cycles a year, for the two existing main collections, annual cocktail and bridal lines and restocking. “We anticipate this growing exponentially as we increase to four main collections a year and launch new capsule lines, such as Vouelle Voyage.”

The brand is available at about 25 points of sale worldwide, including France, Italy, Dubai, Japan, Spain, the U.S., Lithuania and Hong Kong. The partners are targeting the U.S. and Asia in particular to expand distribution.

Vouelle is working on several lines for bridal designers that will be sold as co-branded products, and could add new merchandise like handbags in the future, according to Regan de Vogele.

“Part of the beauty of starting in shoes is that we’ve started, I think, with the hardest part. I do feel like it can only get a bit easier from here,” she smiled.