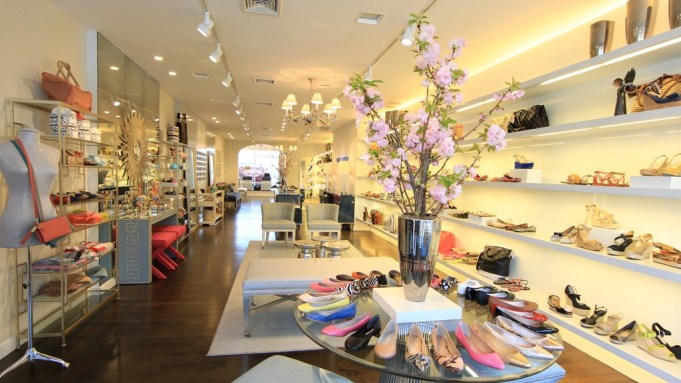 Walin & Wolff is a small business with a big idea.

The company is opening shops for designer shoes and accessories in suburban towns with affluent clientele who would otherwise shop stores in Manhattan or possibly White Plains, N.Y., or Greenwich, Conn. “We can niche into markets where there isn’t competition and where there are fashion-invested consumers,” said Christina Johnson, a partner in Walin & Wolff along with Kim Walin.

Johnson, who spent most of her career at Saks Fifth Avenue where she was chief executive officer from 2000 to 2003, and Walin, a former partner at Ducane Capital and ex-retail analyst, opened the first Walin & Wolff store early last month. It’s a 1,900-square-foot unit situated at 36 Elm Street in New Canaan, Conn., where there’s a dearth of better brands, with a few exceptions such as Ralph Lauren and J. McLaughlin. Johnson knows the suburban turf well, being a resident of Greenwich and witnessing plenty of fallout over the years of mom-and-pop-type specialty boutiques closing, creating an opening.

“I think we’ve got a niche and a real business,” said Johnson, whose maiden name is Wolff. “We believe there is a 10- to 15-store opportunity over time.”

A 1,500-square-foot Walin & Wolff unit will open in Rye, N.Y., in August, and an office/distribution center will open in Portchester, N.Y., in June. Two Walin & Wolff shops in Westchester, and a third in Fairfield County, Conn., are in the works for 2013. Johnson declined to specify the locations pending lease signings.

She disclosed that she’s planning to augment the assortment with additional designer handbags and will launch e-commerce in the fourth quarter of this year or the first quarter of 2013. Valentino handbags and shoes, as well as Manolo Blahnik, will be added to the assortment in July. Walin & Wolff also sells jewelry, scarves, sunglasses, belts and small leather goods.

Walin tends to the financial and real estate aspects, while Johnson is the retail merchant and operator. “We complement each other well,” Walin said. Other Saks alumni have joined the W&W team, including Jo Polanco, the chief merchant; Sal Lenzo, a visual merchandising consultant who worked with the architect to create the store and arranges the merchandise and props to create window and in-store displays, and Michelle Morgan Harrison, the store designer.

The unit, a former Plaza Two shoe store, is long and narrow, with a modern yet feminine decor that’s not frilly and is marked by a sapphire blue logo with a pop of pink. There’s a 26-foot run of shelving and a comfortable, residential decor that draws shoppers through the 1,200-square-foot selling floor. There’s also a 700-square-foot stock area downstairs.

“We like to make trend statements and take a lifestyle approach,” Lenzo observed. “It’s about keeping it clean and simple and not overdoing it.”

For example, there are espadrille and wedge statements in the front with a variety of labels. There’s another statement of bright-colored shoes, and a separate cork and metallic theme. Certain designers have their own statements, including Salvatore Ferragamo and Stuart Weitzman. “We can do 14 statements and have room in between,” Lanzo observed. The bulk of the merchandise is casual though there’s plenty that’s suitable for work and evening. Shoes generally range from $300 to $500; jewelry averages $250. Other key brands are Diane von Furstenberg, Miss Trish, Kors, Kate Spade, C by Chloé, L.K. Bennett, Cole Haan and Tory Burch.

Coming up with the Walin & Wolff concept was “easy,” Johnson said. “For any retailer, shoes represent the backbone” of the business. It’s also the category that’s typically the initial draw to the store. As Johnson said, “Shoes become a woman’s entry.”