The Walter Steiger brand has been reborn as Tank Steiger — a line of wearable shoes and bags for a new generation of women.

Walter Steiger’s daughter has rebooted the label from a two-year dormancy. The heritage shoe brand has been reborn as Tank Steiger — a line spearheaded by Laura Steiger, who has stripped the company’s audacious designs down to a range of shoes all based on a thick, lug treaded sole.

“Before this, I was working in another sector for a publishing house in Italy and I didn’t think of joining the [family business]. Even when I was younger, it wasn’t my thing. When [my father] told me he was closing the brand, I had an epiphany and I began to think that I didn’t want to let our family heritage go,” Steiger said of her decision to reintroduce the line.

While Walter Steiger was originally a shoemaker in Switzerland, his son — also named Walter — founded the family’s eponymous brand in Italy as a ready-to-wear venture in the mid-Sixties. At the time of its closure, the Walter Steiger line was a primarily accessories brand that had stand-alone flagships in global cities including New York and Paris. 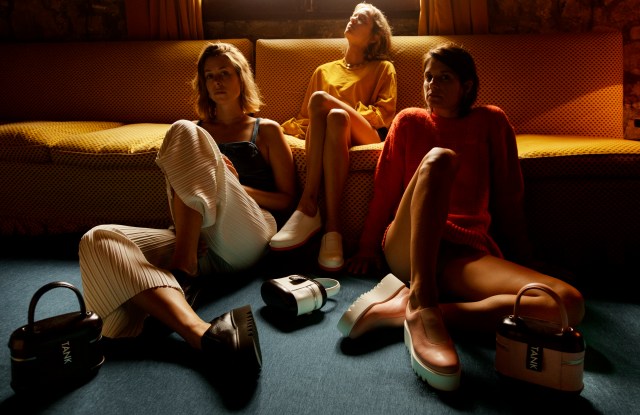 Steiger knew that the accessories business her father and grandfather were familiar with had drastically changed and reconceptualized what the brand could be for the future. “I think that the right formula for a brand right now is a monoproduct label. I began to work at this — of course, asking my father for some advice — and this is the result,” Steiger said of the line, which marked its soft launch just before the onset of COVID-19 and is now ramping up promotional and retail efforts.

The name Tank comes from the brand’s sole design — known as carro armato in Italian, or military tank as it translates in English. The brand presently has a lace-up ankle boot and slip-on style with this sole and will launch an elasticized Chelsea boot style in 10 colors come fall. Each pair retails for under $320 and is manufactured in Italy.

While Walter Steiger was most recently best known for its extreme high-heeled styles — selling an assortment of curved stilettos for luxury prices at stores like Barneys New York — the Tank brand has been conceptualized to address what Steiger sees as an open space in the market.

“I don’t see a lot of high heels in the streets, I don’t think this is the right kind of shoe to do today. There are not a lot of shoes between sneakers and elegant styles. What we have designed is kind of in the middle. I like the idea to have a proper leather shoe even if the sole is rubber, I think there is a lack in the market for this kind of product,” Steiger said.

The brand is now selling through its web site and will soon begin taking meetings with wholesale partners. Its assortment will also include a few handbag styles, including the “Tambour” style, which was revived from the Walter Steiger line. A range of hand-stitched tote bags in pebble grain leather will also launch in the coming months, priced at around $1,000.