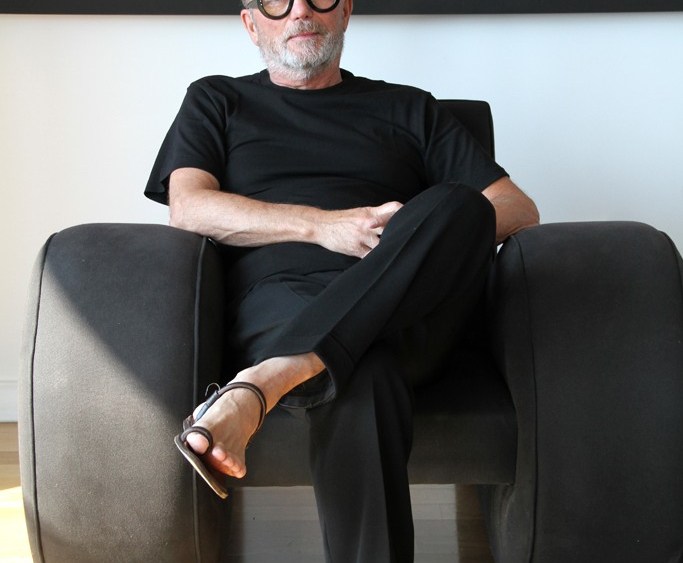 Walter Steiger is gearing up to introduce an entirely new construction for his upcoming spring footwear collection — his most extreme to date.

But he’s not worried about the response.

“It’s crazy, but it will be accepted,” said the designer.

His yet-to-be released silhouette, which he calls the Unicorn, stands at a vertiginous 17 centimeters, or 6.69 inches. It possesses the brand’s signature “curved” heel, but it’s been updated to appear more conical in shape. At the front end is a corresponding platform of almost two inches, made of an ivory, tusklike material with metallic accents.

Reflecting on the seismic changes in fashion since he launched in 1967, Steiger said, “If you didn’t have the right thing for the right season, you were wrong.

“You had to make something new, but if you did something that was ‘too much’ you weren’t considered a ‘fine designer,’” he said, sitting alongside his son and general manager of the brand for North America, Paul Steiger, at a bar in the West Village during a weeklong visit to New York. “Back then, two inches was a high heel. It’s fantastic how the mentality has changed.”

In town to prepare for the Paris-based company’s major wholesale push in the U.S., the two visited with customers at Bergdorf Goodman to celebrate the launch of the collection on the designer shoe floor. Following the line’s wholesale launch in the U.S. with Barneys New York last summer, this is the first time Bergdorf’s has carried the line in a decade. Jeffrey in the Meatpacking District has also begun selling the fall line, which retails from $650 for a basic pump to $7,000 to $10,000 for shoes comprising Swarovski Elements or crocodile.  Hirshleifers in Manhasset, N.Y., will begin selling Steiger’s collection later this year.

The 35-year-old brand’s 13th freestanding store opened in London in May, and the shoes are carried in about 75 doors worldwide, from Lane Crawford in Hong Kong to Tsum in Moscow. Steiger’s flagship on Rue du Faubourg Saint-Honoré in Paris opened in 1974.

The brand is seeing the strongest growth in Eastern Europe and the Middle East — and Paul Steiger maintains that wholesale volume on a global scale has increased by about 20 percent a season for the past three seasons.

In the U.S., Paul hopes to see a 40 percent increase in the wholesale category as business with key retail partners commences.

The brand just showed its resort collection — but it’s spring that Walter is most keyed-up about. Usually one for clean lines and simplicity, the designer said he focused on materials and color, such as pastel purple, blue, pink and more-saturated versions of the same hues. Spring will also feature metallic straps and animal-inspired or embroidery-effect prints.

A renovation of the brand’s Park Avenue store at East 55th Street in Manhattan also is in the works, as father and son are keen on the brand’s only freestanding store in the U.S. to be in line with the concept just developed for the London door. The same idea — rooted in Walter’s favorite interior design motifs, such as mirrors — was also implemented in the Geneva store, which saw a redesign this month.

Paul added that each shoe in the display is showcased in a reflective setting, displayed in front of a mirror, about 12 inches square in size.

“The use of lighting and geometric shapes creates a futuristic aura and emphasizes the volume and depth of the space. The new wall, where the shoes are exposed, is the most important element of the updated design concept,” Paul said, noting the installation was inspired by fine jewelry boxes.