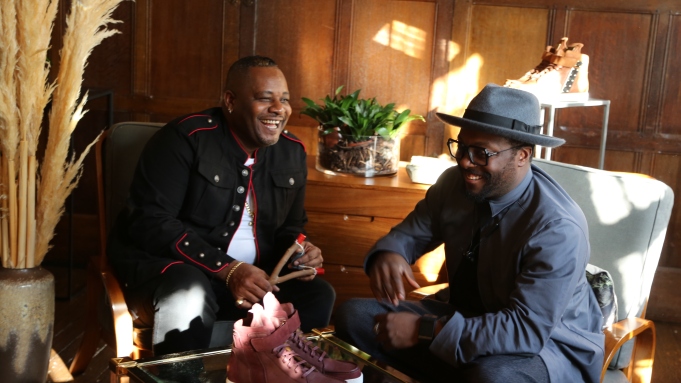 LONDON — Will.i.am says that his official job title at MCCVIII — the shoe brand he designs with his brother Carl Gilliam (or Gill.i.am?) — is “little brother.” Alternatively, he says he’s also known as two-cents-Willy because “[Carl] will always ask me my opinion and things.”

The brothers were in London this week to launch their new trainer brand MCCVIII (pronounced twelve-oh-eight) at Liberty, where they also announced an upcoming collaboration with the heritage department store.

Gilliam said Will.i.am had been the one to suggest starting their own sneaker label. “So my brother [had] been designing this collection for five years, and he always [would] come to me for opinions on things and I was, like, ‘Carl, take it as far as the material and just go. Let’s build something from scratch, we don’t have to go through the traditional route where a big brand does a sideline with us. Let’s just build a company.”

The sneakers are a riff on the classic Clarks Wallabee style, with a slightly squared-off toe. “People be rocking Wallabees but they ain’t seen sneaker Wallabees. Usually, Wallabees are substitutes for sneakers that’s a bit dressy. But they not dress shoes; you never saw a sneaker like that. So Carl flipped the Wallabees into a sneaker and it looks funky fresh.”

They are made in Portugal and come in three “Pharaoh” styles, a high-top, a low-top, and a high-top with a 18-carat gold-plated brass panel on the tongue bearing the brand’s Roman numeral name. Colors include white, gray, tobacco, burgundy, black and cream. The body of the sneaker is made of soft Italian calf leather and nubuck, finished with a lambskin lining.

There’s a further nod to ancient Egypt in the brand’s logo, which appears debossed into the shoe’s rubber soles as a pyramid struck through with a line, forming a visual capstone, which Gilliam said was symbolic as a “sign of achievement.”

The name of the brand is a nod to the address where the brothers grew up: 1208 Glenfield Court, and is inspired by their impoverished childhood and the family that kept them on the straight and narrow. “My brother and I were raised in the ghetto of Boyle Heights in East L.A.,” explained Will.i.am. “In the neighborhood we grew up, it was pretty rough and our family was very strict, so your uncles are like your dads and your aunts are like your different moms and your grandma is really the queen and your cousins are really your sisters. So when I asked my brother what do you want to name the shoe and he was, like, ‘1208.’ And I was, ‘1208? You wanna do that?’ And he was, like, ‘Why not?’ So, alright.”

Gilliam said his family all had an input, including his mother, whom he lives next door to. “She gives a lot of feedbacks. She’s all up in my business,” he said. “I leave the house and, ’cause I have to pass her driveway on the way, you see her behind the curtains saying’ ‘Where you going?’ Even if I’m just going to the shop.”

As he talks, Will.i.am toys with a rough-hewn slingshot, a gift from their mother to Gilliam, after he told her he was nervous about “going up against giants” with the launch of MCCVIII. “So she left my house and she comes back in and has this [slingshot],” said Gilliam. “And she was, like, ‘Now go slay Goliath.’”

The exclusive collaboration with Liberty will be available in February. For this, they were allowed access to Liberty’s archive, where they found an unused print block from the early 1900s.

“We were invited to go to the archives and they showed the computers and I looked at how many prints they had, it was a gazillion prints,” Gilliam said. “I wanted to be original and Anna [Buruma, Liberty’s archivist] went in her cabinet and pulled out this fossil and said, ‘It doesn’t get any more original than this.'”

The brothers said they would be incorporating their own paisley designs into the pattern and reworking the Pharaoh styles. “It’ll be printed leather and colorful,” Gilliam said.