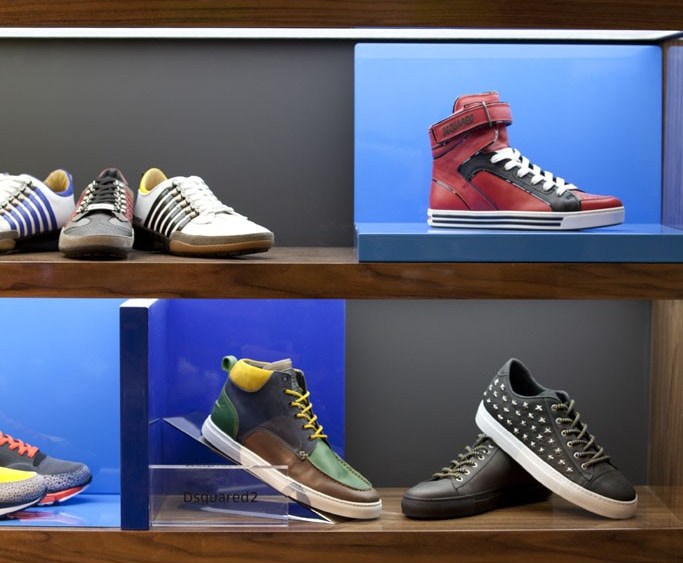 With more than 96,000 square feet of space and a selection of up to 15,000 different styles at any one time, Level is double the size of the world’s largest shoe floors including Selfridges in London and Macy’s in New York. The store is divided into four areas: women’s designer, women’s contemporary, men’s and trends and has 40 designer concessions, including anchor tenants Louis Vuitton, Prada and Gucci.

Chalhoub described the store as a “milestone” for the family-run company, which operates more than 450 luxury retail units in the Middle East. “In the many ventures in which we’ve been associated, we’ve been a franchisee trying to have the perfect execution of what the franchisers were giving,” he said. “In this specific place we’ve had to create the concept. The challenging part was to be a house of brands rather than the execution of one specific brand.

“Its very complex for our buyers because we need to give people the depth of choice but also things that are adapted to many different tastes,” said Chalhoub.

The store will have the spring collection of Louis Vuitton four to six weeks before anywhere else in the world. Aside from the selection of designer brands, Level will feature a concept store called The Zoo, featuring Middle Eastern brands, providing a launch pad for regional talent. Merchandising for Level was very complicated, said Chalhoub, as the idea is to offer “something for everyone.”

“Women in the Middle East are perhaps more attached to shoes than anywhere else in the world,” said Chalhoub. But he is not banking on that alone, adding that the large amount of retail tourism in the Emirate is crucial to success. “With 10 million visitors coming to Dubai, it creates a booming retail environment,” he said.

The idea for a dedicated department store for footwear, he said, was based on qualitative market research. “Footwear is one of the fastest developing in luxury,” he said. “We are in an era where people are paying much more attention to the shoes they wear.” Despite the wobbly global economy, Chalhoub said business has stayed on track. “It’s a growing market and has been developing even throughout the crisis because people do not stop dreaming,” he said. “People aspire to a better life, people aspire for luxury, for quality.”

While Chalhoub would not reveal investment figures, he said this is one of the company’s biggest undertakings to date. “I’m not an entrepreneur if I do not take risks and don’t take challenges,” Chalhoub said. “For us it’s a question of looking at what customers want and delivering the best experience. What we don’t know for sure is how long it will take until we have a return on investment. Will it be five years, will it be 12 years? What we are sure of is our commitment to make it work and happen.”

Level is still in soft opening stages, but nearly 80 percent of the store is complete. The Vogue Café (operated by Condé Nast Restaurants) will open by December.