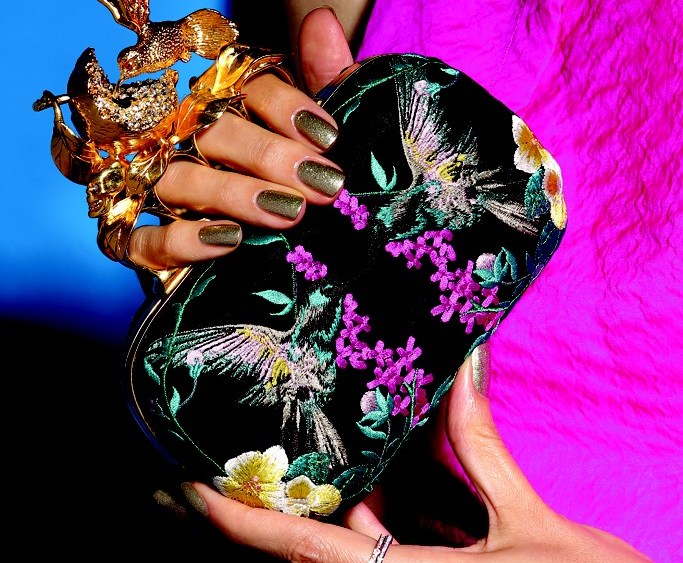 They say that it is what’s on the inside that counts, but with fashion’s latest wave of diminutive statement bags, no one will think twice about the contents of your clutch — not that there’s much room. In an array of eye-catching colors and intricate embellishment, minaudières have assumed the conversation-piece mantle from the cocktail ring.

Designed with a nod toward the Art Deco period, many of resort’s structured clutches are crafted from Lucite, resin and brass, with luxe accents including satin, sequins and crystals. And as demand for novelty increases, many designers have turned to the unconventional for inspiration. For example, designer Fiona Kotur sourced inlaid material from an electrical manufacturer for her resort collection’s Hal style, named after the computer in Stanley Kubrick’s film “2001: A Space Odyssey.”

“It is a sense of serendipity and the unexpected that seems interesting now,” says Kotur.

Retailers have seen an uptick in consumer interest in fanciful clutches. “Designers are focusing on innovation in the clutch category, which is giving customers a reason to shop,” says Brooke Jaffe, Bloomingdale’s fashion accessories director. “You could build a wardrobe of fun clutches to mix and match with all your outfits.”

Traditionally, the multiples business has been the domain of the shoe department, but stores see similar potential in the clutch trend, even when they’re priced at $1,000 and up.

“The clutch has been very important recently, especially since the spring season when we saw so many on the runway,” says Ken Downing, senior vice president and fashion director of Neiman Marcus. “The idea of this beautiful Alexander McQueen minaudière with knuckle details is really popular with our clients. And they are not just buying one. They are buying multiple bags, and collecting them as if it’s a work of art.”

In this case, size does not seem to matter — the smaller, the better. As designer Brian Atwood puts it: “Clutches are so sexy, and who needs more than their mobile device and a lipstick these days?”