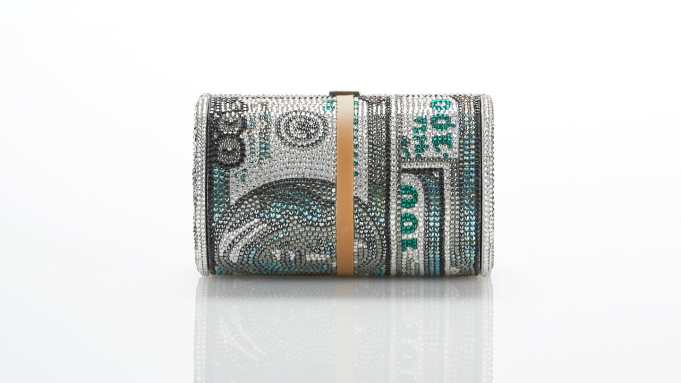 If it seems counterintuitive that Alexander Wang would want to collaborate with Judith Leiber on a limited-edition minaudière, that’s the point. Wang will introduce the fruit of his collaboration with Leiber, known for its posh but kitschy crystal-encrusted handbags, on his spring runway: a purse shaped like a thick roll of $100 bills done in more than 10,263 black, gunmetal, green and clear Swarovski crystals. It’s topped off with a real industrial rubber band and a chain strap. The bags, which will produced in an extremely limited run of 20, take about a week to hand bead.

“When I think about collaborations, I always try to work with people who do something that’s very specialized and who are a leader in their field,” Wang said. “I love that we don’t normally do evening bags or do anything that’s really decorative or bedazzled.” To that end, eveningwear in general isn’t the first thing that comes to mind with Wang’s street and casual-driven collections, but he noted that red carpet dressing has been on the uptick for him.

“Within the last year and a half, we’ve been pushing a lot more evening capsules in our pre-collections,” Wang said. “One of the gowns that we’ve done for three seasons now has been consistently one of the top sellers in our entire line, so we know there’s a customer for it.” There are a few small handbags that can cross over into evening, but for the Leiber collaboration Wang wanted “something a little more traditional but also in the context of it being subverted.”

To some extent, a part of that subversion is the minaudière’s price. At $4,995 it is far beyond Wang’s typical contemporary and advanced contemporary price points. The Alexander Wang x Judith Leiber bag will be available in a limited quantity at the Alexander Wang New York and London stores, Saks Fifth Avenue and alexanderwang.com in November, but the first glimpse will be at Wang’s show Sept. 9.

Asked what he was planning, Wang said, “We’re going to be doing something completely different.” He wouldn’t reveal any more details beyond that the show will not be at his standard venue of Pier 94 — though he deviated for fall, too — and the format will be new for him. “I think it’s a really exciting week for New York because there’s so much change and so much people are expecting or not expecting to be the outcome,” Wang said. “That’s something that always drives my curiosity, to see how people react to certain things.”