An Inside Look at Counterfeit’s Dark Alleys

The sheer number of people going in and out of the building is startling. Droves of women of all ages and in groups, some with husbands in tow and some... 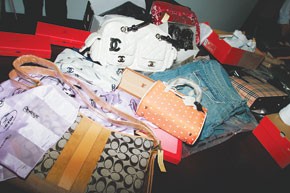 The sheer number of people going in and out of the building is startling. Droves of women of all ages and in groups, some with husbands in tow and some without, walk up and down the dingy stairs of a building near Canal Street in Manhattan hoping to find fake bags to bring home.

Whatever happened to not talking to strangers? What about avoiding dark alleys? Apparently none of those safety adages applies in the pursuit of counterfeits, as this reporter learned while observing a recent undercover investigation.

With the holiday season approaching and shoppers taking to the stores and streets in throngs, sales of counterfeit goods will parallel the sale of legitimate goods. Counterfeits are truly a shadow industry; must-have products and must-have brands generate sales of illegitimate goods as well as genuine ones according to apparel industry sources.

Federal agencies, working with local law enforcement and private investigators, have their hands full. The counterfeit industry is estimated to have sales volumes in excess of $200 billion, globally. In New York, counterfeit raids are frequent. Aside from Wednesday’s $200 million raid (see related story here), the latest bust was in October. The raid was carried out by the New York Police Department at a commercial building in the College Point section of Queens. It resulted in 13 arrests and the seizure of an estimated $4 million in counterfeit apparel bearing the logos of brands such as The North Face, Polo, Lacoste, Rocawear, Seven For All Mankind and Fubu.

But brand owners and investigators alike describe the influx of counterfeits as an epidemic. Anyone who has walked through the area around the corner of Broadway and Canal recently knows how easy it is to find counterfeits. Shoppers don’t even need to walk around. Stand in one place long enough and vendors will approach you. In past trips to the area to do research, this reporter has always been too nervous to take them up on their offers since it usually involves following them down a dark alley. This time WWD enlisted the help of someone very familiar with the area from doing investigations for luxury brand enforcement programs: Andrew Oberfeldt, who currently runs Abacus Security, a private investigation company.

Prior to starting his own company six years ago, Oberfeldt was a New York Police Department detective. He worked on the SWAT team and in the narcotics division. Oberfeldt was also assigned to security details for politicians and taught at the Police Academy. Abacus employs five full-time staffers and dozens of undercover investigators to find counterfeit sales in the area for top luxury brands. Oberfeldt said 90 percent of what he does is counterfeit investigations.

This reporter’s education in counterfeit shopping started before meeting Oberfeldt on a recent fall day. At the top of the stairs of the Canal Street subway stop, we were practically bombarded by offers. “Louis, Coach, Chanel,” they chanted. There were at least four people hovering around, each holding a paper with pictures of the fake goods.

The meeting with Oberfeldt was on White Street, two blocks off of Canal along Broadway, to begin a tour of the area’s counterfeit shops. Closer to Canal the double-decker Gray Line tour bus stops to disgorge and take on more passengers.

As Oberfeldt walked along the street, he pointed to one building where four to six vendors currently operate, which includes one legitimate storefront. It’s a building that has been raided many times, he said. In the past, the basement was subdivided into storage units full of counterfeits. Despite the raids, the operations reopened each time, he said.

The nature of the counterfeit business is very fluid, Oberfeldt explained. As product is moved off more visible corners, the goods crop up on the side streets, hidden in buildings with nondescript fronts. Sometimes the fake stuff will just crop up again in the same locations as before, over and over.

“Until enforcement efforts make it impossible to do business, counterfeit purveyors will just keep opening back up,” Oberfeldt said.

The city and brand owners have been increasingly vigilant about shutting down people selling fakes, but it is difficult to get accurate numbers on the volume of goods moving through the area to determine what effect the raids have had. So Oberfeldt and others like him continue with their efforts to keep abreast of the most recent vendor strategies.

“Let’s go see if we can get hawked,” Oberfeldt said, leading this reporter up Broadway toward Canal. A few steps away, and a young man in his early 20s stopped to offer fake designer bags, displaying pictures.

“How much for that one?” Oberfeldt asked, pointing to a black bag. The “runner,” as they are known in the industry, said $45. Oberfeldt and this reporter were quickly off, following behind the runner. A few blocks south, the runner turned left down a side street. He moved quickly. Along the way, other runners hawked bags and merchandise.

Finally, Oberfeldt and this reporter stopped in front of a building, went inside and climbed six flights of stairs, following the runner past groups of women shoppers. The shoppers were perfectly at ease, seemingly familiar with this routine. The runner opened a solid metal door on the landing to reveal a gate. Both doors were posted with “Private Property” and “No Trespassing” signs. While waiting for the runner to find the keys to open the metal grate — dumping change, receipts, a pack of Marlboro Lights out of his pocket — a middle-aged woman on her way down stopped briefly to chat.

“Oh, the seventh floor is just full of stuff! You should check it out,” she said.

When the runner finally found his keys and unlocked the grate, he led Oberfeldt and this reporter into a room full of women working at sewing machines. Oberfeldt later said the shop was a legitimate business.

Walking through a large room, and past a table full of older Asian women playing mah-jongg, the runner led Oberfeldt and this reporter down toward a corner of the room where the runner unlocked another door that led to a smaller room choked with handbags. Ceiling to floor on all four walls were counterfeit Chanel, Coach, Dolce & Gabbana, Prada and other bags. The room, unlike the sewing room, had air-conditioning. It was cool and quiet.

“You need a bag to match your outfit,” Oberfeldt said to this reporter with a wink, signaling that this reporter was to play along as a customer. “How much for that one?” He pointed to a black-and-white shoulder bag with a very recognizable trademark on it. The Chanel knockoff did not look like any legitimate design from the company.

The runner talked throughout the negotiations on his cell phone in Chinese to an off-site contact about the price. Oberfeldt talked him down from $45 to $35. Once the young salesman cleared the price with the disembodied voice on the phone, the sale was made.

Before leaving, the man asked if there was any interest in watches. When Oberfeldt said yes, the man pulled out a small backpack stuffed full of very well-known luxury-branded watches.

Oberfeldt later said it’s common for the brands that are particularly vigilant not to be displayed on the street-front booths. Enforcement efforts by the brand owners of watches are more intense. Still, if you ask about popular brands they are available. The investigator also said he’s been on raids on this particular building many times. He’s been in the workshop and in the product room, with different goods and a different runner, but the same location.

Back on the street toward Canal, an Asian man fell into step alongside and greeted Oberfeldt. “You’re the Company,” the man said.

They exchanged pleasantries and it was apparent that this man recognized Oberfeldt from a previous raid. Oberfeldt explained later that the vendors and others in the neighborhood call the investigators and cops they encounter “the Company.” They have other nicknames for law enforcement task forces that work in the neighborhood.

Most of the runners in Chinatown are female, Oberfeldt said. Male runners are rare. Runners are simply told to bring customers back to storage areas. “No cops” is the only direction they get, he said. But if they’re too cautious they make no money. Some of them will bring anyone back.

“I look like a cop,” Oberfeldt said. He spends a lot of time in the area, once a week or more. And still they took him, with this reporter, back to the storage area.

What was most striking about walking the Canal Street neighborhood with someone like Oberfeldt was the fluidity of the business. Raid one location? The counterfeiters come back until you make it impossible for them to stay. Then they get runners and rent storage in Queens. Or they start to keep stuff in an apartment. If there is one brand that’s particularly active it disappears off the visible booths, but if you ask for it, the fake goods are still around.

You just have to be willing to go down an alley, up six flights of stairs and into some back corner of a locked room. But that’s OK, because there are lots of other shoppers along the way.