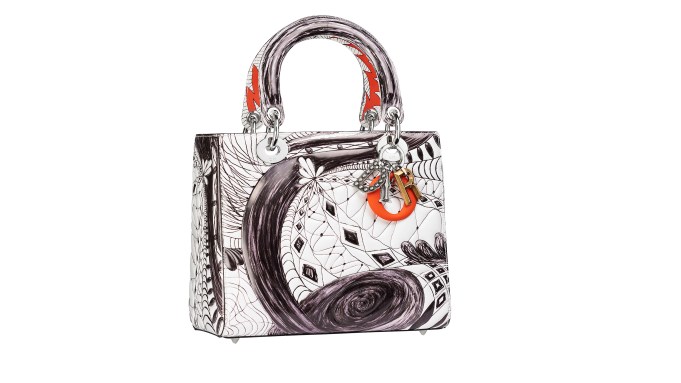 PARIS — When Jamilla Okubo received an e-mail from Dior asking if she would be interested in customizing its Lady Dior handbag, she initially was skeptical.

“I thought it was a scam at first,” said the 24-year-old artist, who only graduated last year from The New School’s Parsons School of Design.

“I just never thought that, out of all brands, Christian Dior would reach out to me to do an artist collaboration. I think it’s amazing. I went to school and learned about this brand and watched their runway shows for inspiration, so this is like a big deal,” she told WWD.

Indeed, the French fashion house cast a wider net for the second edition of its Dior Lady Art project, which launched last year with seven male artists, all British or American. Okubo, who was scouted via social media, is one of 10 participating artists this year — including four women — hailing from countries as diverse as South Korea, China and France.

Born in North Carolina and raised in Washington, D.C., Okubo operates at the crossroads between fine arts and fashion, with works that incorporate patterns inspired by African textiles, which she uses as a gateway to explore her Kenyan roots.

She and another emerging talent, Betty Mariani, have been chosen alongside well-known art world figures such as Lee Bul, John Giorno and Jack Pierson. Hong Hao, Friedrich Kunath, Namsa Leuba, Spencer Sweeney and David Wiseman round out the selection.

“At first, [I felt] overwhelmed, but also it means to me that something about my art work could potentially be at that level,” Okubo said of sharing the stage with bigger names. “It gives me hope.”

Dior has given the artists free rein to customize its best-selling handbag, created in 1994, by playing with its signature cannage quilting pattern and letter charms. They used materials such as mink, velvet, sequins, pearls, multicolored threads and textured metal in their creations.

The collection of bags will be launched on Nov. 30 with a cocktail at the Dior boutique on 57th Street in New York. Further events will be held on Dec. 8 at the House of Dior flagship in Seoul, in the presence of Lee, and on Dec. 9 at the Dior store in the China World mall in Beijing, with Hong in attendance.

The handbags, produced in limited editions of 50 to 150 units per design, will go on sale in 29 Dior boutiques and shops-in-shop worldwide beginning Dec. 1. Prices range from $5,700 for some mini bag designs to $9,700 for Lee’s medium-sized handbag outfitted with dozens of Plexiglas mirrors.

Pierson based his two designs on drawings he made in the French capital a couple of summers ago.

“They came out of me spending a month riding a bike around Paris and just soaking it all up and seeing everything from shop windows to museums,” he said. “It’s all just graphic and line and motion and things like that, but I feel like I just let a Parisian sensibility seep into it somehow.”

The American artist, who collaborated with Acne Studios last year on a limited-edition collection of leather pouches, had never tried his hand at designing a handbag before.

“I think that boundary between fashion and art is getting less and less defined lately,” he remarked. “Part of my enthusiasm toward it is, I feel like all of the Parisian artists of the early part of the century collaborated: Man Ray and Picasso and Salvador Dalí.”

After touring the Dior archive and workshops on Avenue Montaigne, Pierson decided to produce the smaller of the two bags in black satin embroidered with gold and silver threads, sequins and pearls, adding studded metallic charms inspired by the scavenged letters that are a trademark of his work.

“I just felt like, how could I resist, if this is an option, having this kind of intricate beadwork? To have one of my drawings interpreted in that way is pretty special. To me, that’s a sensational looking thing,” he said.

“I was surprised by how quickly they could do things, and intricately, and that just anything I suggested was easily created somehow. In my own art world practice, it doesn’t go like that,” Pierson added.

Indeed, each bag presented its own technical challenges. Wiseman had gray lambskin stitched with a mix of cannage and floral patterns, and embellished the charms with lily-of-the-valley branches in porcelain-effect metal inspired by his signature porcelain ceilings.

Giorno opted for rainbow-colored metallized calfskin emblazoned with lines from his poetry. One says “We Gave a Party for the Gods, and the Gods All Came,” while the other proclaims “You Got to Burn to Shine.”

Okubo came up with three designs blending patterns inspired by African textiles with couture-inspired beading techniques. One is made from orange lambskin, embroidered with flowers, with blue satin handles, while the other two are festooned with fringes.

“I really like working with my hands, so these bags are like a representation of what I would love my work to evolve to also,” said the artist, who wants to start incorporating beading and quilting into her work.

“Also I’m working on starting my own licensing pattern design brand,” she added. “Then hopefully that will lead into designing my own collection of clothing, or some sort of wearable art.”