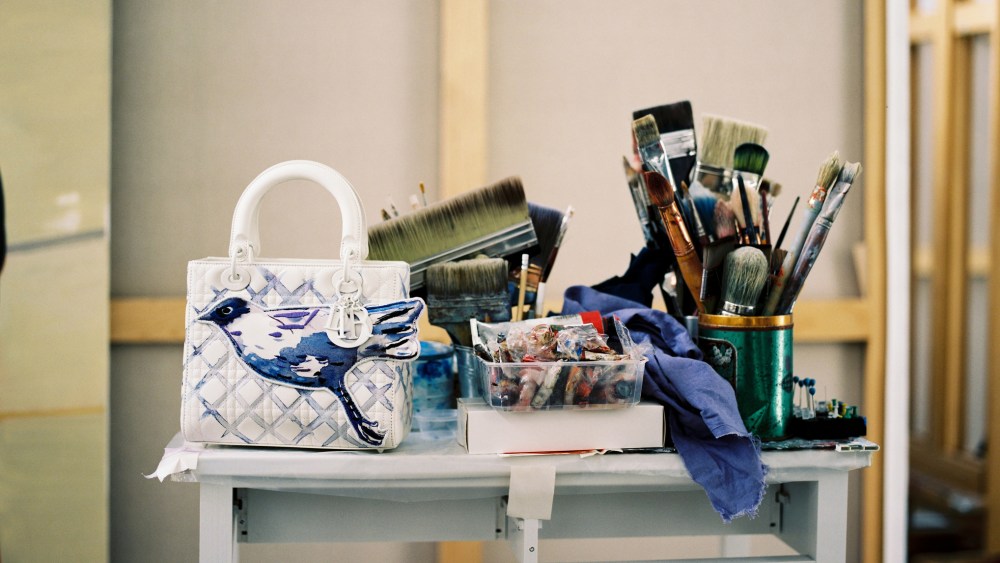 PARIS — Now in its seventh edition, the Dior Lady Art project offers artists an opportunity to encapsulate their creative universe on a small, portable object and channel a variety of personal messages.

Some, like Amer and Machneva, would appear to have a natural affinity for working with a fashion house, given that their work is steeped in the language of textiles. But Amer, the first Egyptian artist to participate in the initiative, admitted she’s not that into clothes.

“Fashion per se doesn’t interest me. However, as an artist, I am interested in creativity, be it in fashion or design. I don’t want to ever be a blind follower of fashion,” she said in a Q&A provided by Dior.

Amer’s feminist sensibility was awakened during her art studies in the ‘80s at the Villa Arson school in Nice, where she said she was denied access to painting classes on the grounds of her gender. “Because painting was historically defined as a male language, I decided to use embroidery, the most feminine of languages,” she explained.

Her designs for the Lady Dior handbag were inspired by her garden sculpture “Women’s Qualities,” which spells out in block letters traits often associated with women. The bags feature words such as “resilient,” “nurturing” and “determined,” though Amer said she deliberately left out the word “beautiful,” which appeared in the original work.

“I was concerned about the meaning of that word in the world of high fashion,” she said.

Machneva, who graduated from the department of textiles of the Saint Petersburg Stieglitz State Academy of Art and Design in Russia, started out as a textile designer and has always found inspiration in historical costumes. Her work uses tapestries created on manual looms to depict abandoned Soviet-era factories and machinery.

Noting that “the world has been extremely turned upside down in the last few months,” she hopes to use her Lady Dior handbag designs to spread a message of unity.

“The diversity of cultures is what makes the world truly strong, beautiful and interesting,” she said. “Sometimes it seems that there is nothing more banal than saying that we need the world in peace, but this is the most important thing.”

While feminism isn’t usually part of her practice, she decided to dedicate her project to women, as they are inextricably linked to the history of the French fashion house. “It is about freedom of choice and pride to be a woman,” Machneva said.

The bags, which look like sculptures inspired by architectural forms, are designed to represent the load women carry and the strength this requires.

“The 3D geometric shapes on the bags are a symbol of this idea. They are part of the design and at the same time represent an additional load but don’t have any practical function, like many stereotypes surrounding us in life,” she commented.

She sees fashion as an independent art form, a means of self-expression and an experiment. “With the help of fashion, we can communicate with one another. Therefore, I see great potential in this force, which can be used to help people both accept themselves for who they are, and to show the beauty of the diversity of people and cultures,” Machneva argued.

Cwynar, a Canadian-born artist who lives and works in Brooklyn, New York, fashion is part of the flood of imagery that populates our consciousness, sometimes making it hard to maintain a sense of self. Still, she’s a self-confessed fashionphile.

“I think about fashion a lot in my work, how it works, how trends blossom then fade then come back again, and also how it feels good to desire things, how desiring beautiful objects can keep us connected to the world, can be generative,” she said.

Cwynar began her career as a graphic designer, including at The New York Times, and is inspired by the way images inform our view of the world. She conceived her two handbag designs as miniature encyclopedias of this type of imagery.

“I wanted to make something that always has new details to notice, things that reveal themselves over time. I began collecting images from all sorts of archives, as well as my own photography, and Dior began doing tests. They brought the images to life in amazing ways that I could not have achieved on my own — images are sewn as patches, printed as 3D objects, and woven into the bag,” she said.

“I love the idea of my art moving around the world, on somebody’s arm, and of combining this high fashion symbolic object with other more historic symbols of value — images from art, nature and history,” she mused.

Priced from 5,900 euros to 19,000 euros, the Dior Lady Art 7 collection will be teased from Nov. 9 to 15 at the “Art ‘N Dior” exhibition at Shanghai’s West Bund Art & Design fair, to be followed by a pre-launch event on Dec. 1 at the Dior boutique in Miami during Art Basel at Miami Beach. It will also be available in selected stores from Dec. 8 to 31 ahead of the global launch in selected stores and online.