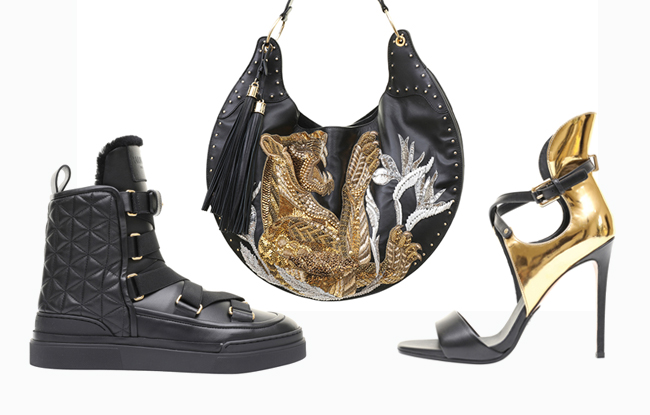 PARIS — Grabbing some of the limelight from the prerequisite front-row glamazons at the Balmain show on Saturday — presenting the men’s fall 2017 and women’s pre-fall collections — will be a range of distinctive bags and boots marking the relaunch of the brand’s accessories line.

Creative director Olivier Rousteing, who joined the house in 2009 and has “grown up alongside the collections,” described it as the missing element in his silhouette. But he preferred to wait for the right moment.

“It’s time to take Balmain to the next level now that the identity is established for the ready-to-wear. You know who the Balmain woman is,” Rousteing said.

“Before launching an accessories line, the quality needs to be perfect; it needs to be really strong. And it’s a long process,” explained the designer, adding that, after six years in the house, he was also ready for a new challenge.

As reported, the reboot marks a new phase in the expansion of the fast-growing Paris fashion house following its acquisition last June by Mayhoola for Investments, the Qatar-based parent of Valentino and Pal Zileri. Balmain chief executive officer Emmanuel Diemoz said at the time that accessories represented only 4 percent of the label’s business.

Among other motivating factors behind the relaunch was the success of Balmain’s recent hookup with H&M, which got Rousteing thinking about ways to open up the brand to a younger client. “I had in my mind the client who is crazy about Balmain but maybe can’t afford the ready-to-wear. I wanted to put out this accessory line to make sure they can get a piece of Balmain, too.”

The collection will go on sale in boutiques worldwide in June. Prices are still being finalized, though a women’s bag will likely start at around $1,690 and a men’s bag, $2,350.

Rousteing said he sought input from friends of the house — or his “Balmain army” — on the bags. (He declined to share names, though it’s the Kardashian-Jenner clan who command the highest ranks in said army, bien sûr.) “I have so many women around me who can explain their relationship with their bag and what they keep in them. I can’t create bags without the girls, because it’s so intimate,” he continued.

Grouped into three families, the collection also pays homage to house founder Pierre Balmain. Each plays on a different gold accent: a coin medallion for the “Renaissance” collection; a metal gold thread motif for the “Balmain Le 44” designs, named after the address of Balmain’s headquarters at 44 Rue François 1er in Paris, and a hotel key charm with leather tassels for the “Domaine” line.

Key styles include the rectangular “Renaissance” handbag in super-soft calfskin with a bold golden coin medallion clasp and gold ring hardware. The bag is available in two sizes and different colorways — including bicolor versions — as well as an all-gold metallic style and a quilted finish in a rose-cut pattern dubbed “La Rose de Balmain.”

Rousteing flagged an oversize round style from the “Domaine” group in woven leather in a signature houndstooth motif among his favorites. The style exists in a more elaborate, full-on Balmain version embroidered with a tiger, as well as exotic skin and fur versions. “It was important, with my ready-to-wear, which is already very structured, to give some softness with the round shape,” he said.

Just as the house’s clothing offers diverse silhouettes — from body-con dresses to suits to jumpsuits that cover the body — the accessories offer different looks, volumes, finishes and forms, explained Rousteing.

“Launching accessories is not only about business, it is also an aesthetic. When I create my accessories I always have my men’s and women’s silhouettes in mind,” said the designer, who will debut a selection of items in the show, including an over-the-knee pointy boot in a combination of leather and suede — also worked in watersnake and python versions — and a unisex, fur-lined technical boot with a sneaker sole and elasticated strap lacing in a variety of finishes to match the bags.

“I worked on flats and super-high heels with very much an L.A.-inspired, cool attitude. I wanted to ensure that, even if they stay glam and sexy, there is a technical aspect,” added Rousteing of the line, which includes heels in a knitted fabric typically used on sneakers “that feels like socks.”

“When you add these cool boots, flats or knitwear shoes, it brings a modernity to my silhouette.”

“There are the gold elements and craftsmanship on metal, but there are also ultra-minimalist shoes where it’s the shape that does the talking,” Rousteing said. “It’s a new era for Balmain, this sexy-minimalist direction. And all these elements will help make the ready-to-wear to be even stronger.”