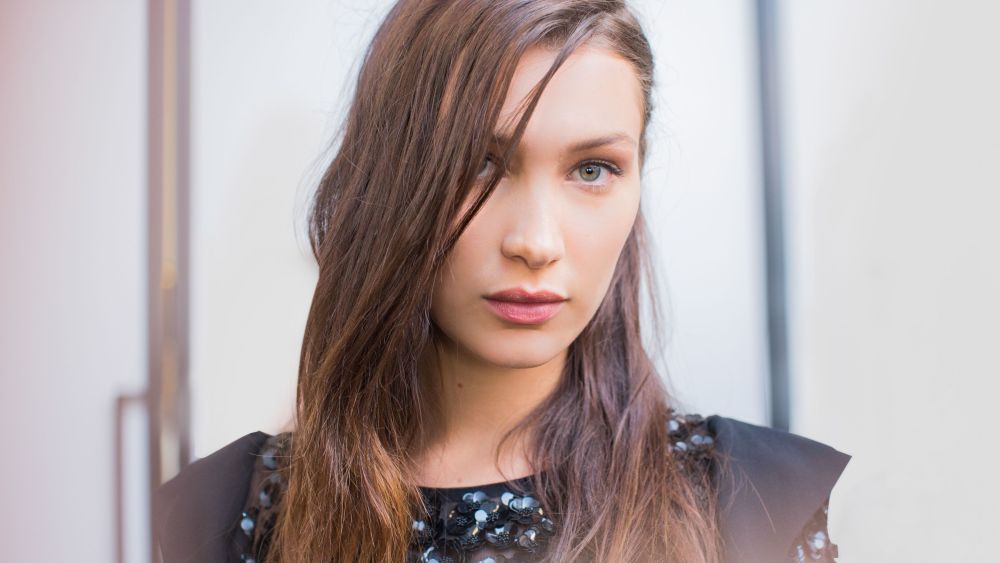 Bella’s got it in the bag. A Bulgari bag that is.

WWD has learned exclusively that the 20-year-old model will represent the Rome-based luxury goods house for their accessories advertising campaigns, which includes leather goods, eyewear and silks for consumer print, digital, social media and public relations for the fall 2017 collection. The ads will focus primarily on the signature Serpenti collection bags as well as a new introduction for the house, a new Diva collection line of bags.

In a brief interview backstage just prior to shooting the video segment of the campaign, Hadid was busy being attended to by the Bulgari creative team sporting a high-waisted black tuxedo pants and metallic rainbow-stripe top paired with the brands classic Serpenti bag in a patent leather rust color for her first look.

Bulgari was a household name according to Hadid, who said she gravitated toward the Italian luxury brand when raiding her mom’s closets. “I don’t remember specific pieces, but I remember my mom loving it and Bulgari being talked about in the household. It’s so crazy I am working with them now. I’ve always seen it as such a beautiful classy brand,” said Hadid, who added that a gold metallic Serpenti at home is one of her favorites. “The Serpenti forever, of course,” she murmured before giving a “cute” stamp of approval to the new Diva bag.

Hadid let slip that the shoot was actually the second time she has worked with the brand, but Bulgari executives would not reveal the nature of that project.

Bulgari chief executive officer Jean-Christophe Babin’s decision to hire Hadid was natural to fit his objective of reaching the younger Millennial customer. Leather goods generally attracts a younger customer than the jewelry at Bulgari, especially in China where discretionary income is plentiful among Millennials. While Lily Aldridge and Chinese actress Shu Qi are faces of the brand across the board, Hadid will be the face for accessories only. The ceo said reaching that audience also requires a different type of media and Hadid social media prowess sweetens the match.

“She is quite young but very elegant,” Babin said.

He recruited Terry Richardson, who had previously shot Carla Bruni for the brand, to photograph the campaign because he “understands the Roman culture beyond the empty temples and marble but also the way of behaving which is the Italian style. He already knew benchmarks of the brand.”

Babin said he was pleased with the outtakes he saw of Day One of the shoot. “I’m amazed because it is very young, very fresh, very modern but at the same time very sophisticated.”

The ceo attends most of the brand’s campaign shoots, perhaps to enjoy the creative process but to also guard its image. Shooting ads for accessories can result in pushing the brand message in a more provocative and daring way, more so than jewelry. As Babin maintained, “It has to stay in the limits of an institution jewelry brand that sells $100,000 necklaces to someone who wants to own it forever.”

Serpenti has been a sole bag focus for the brand until now. The Diva bag was, like Serpenti, an extension of a jewelry collection. According to Babin, Diva has been the most impressive jewelry collection to launch of late so it was a natural to extend to leather goods. If Serpenti is the sophisticated socialite, Diva is her “funky” more youth-centric younger sis. The clasp of the bag plays upon the Diva fan shape, which is based on a Roman mosaic tile pattern. With a semi-octagonal shape with softer leathers, chunkier chains and an allover mini-stud detail, it is in line with other successful bags prevalent in the luxury market today.

The spirit is youthful, but the prices are in line with Serpenti’s opening at about $1,600. Babin will stick to fragrances for enticing a younger customer into the brand. Selling bags at a lower price point to Millennial and Gen Z, according to Babin, is “a short cut because young people today will spend $1,000 on an iPhone.”

He will presumably be reaching those customers via Hadid’s vast network as well newly recruited brand ambassador Jasmine Sanders aka Golden Barbie massive global digital following. “I feel Jasmine and Bella say a lot about our reasonable ambitions in leather goods,” Babin said.