BH Mafia’s It Bag is Plastic and Fantastic

The emerging Beverly Hills brand’s fans have a love affair with the company’s PVC pieces.

LOS ANGELES — Call it PVC perfection and the BH Mafia’s got it.

The young lifestyle brand’s gaining a following with its plastic creations, most notably a PVC tote bag with metal hardware closure in two sizes, flying under the banner of the “Fantastik Plastik” collection in myriad colors. Now, its founder wants to expand into PVC apparel.

“I was traveling a bit more and I was going to a lot of tropical locations, and what I was seeing were all these women going to the Four Seasons and resorts, but they were not bringing their designer bags with them,” said Ethan Campbell, the brand’s founder. “I had the idea of creating a piece that was a classic silhouette and that would be well-known in the market.”

The name, a label for what Campbell calls his friend and follower base, he originally hoped to have on a custom license plate. It was the perfect seven letters. The California Department of Motor Vehicles didn’t think so and rejected the application.

Although BH Mafia’s followers have largely filtered to the brand through the bags — it’s number-one seller — the line also includes decor, such as silk pillows and framed art. The general idea is to mix the high-end with bright, whimsical patterns or materials Campbell said are a reflection of his own personality.

True to that sentiment, Campbell does everything for the business right now, including shipping and writing the hand-written thank you notes to each of the company’s customers ordering through the BH Mafia’s online shop, a touch he views as key to establishing how the brand is perceived in the market.

“When I get a package in the mail and it’s just some thrown together box, it’s really upsetting to me especially when you’re paying good money for a quality item,” he said. “It’s important to me that my customers know they’re appreciated. Going the extra mile is necessary.” 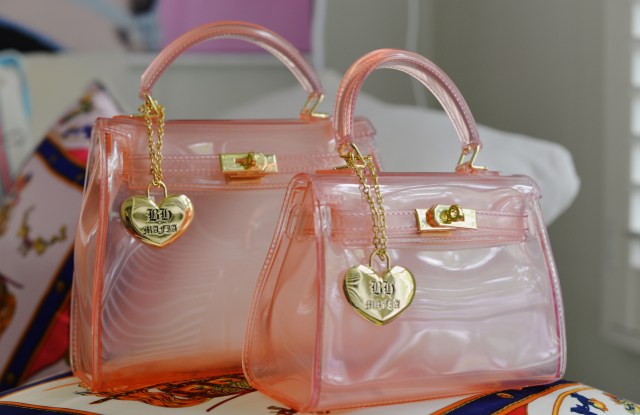 A rosé-colored version for summer of the BH Mafia’s best-selling bag.  Courtesy Photo

The line, now two years old, started off with distribution in many of those same tropical places where Campbell first got the idea for the bags, with retail partners that include the Four Seasons in Lanai, Maui and Oahu, along with the Hotel Californian in Santa Barbara, Calif. That’s since broadened out to more lifestyle boutiques, including Kitson’s flagship location on Robertson Boulevard and Maison Midi at American Rag Cie on La Brea Avenue in Los Angeles. The bags will also be going into Fred Segal’s Malibu location, following a stint at the retailer’s Sunset Boulevard store.

Campbell said the plan is to continue growing the wholesale business via the resort sector in addition to more fashion and accessories boutiques.

“What’s important to me in my line is the affordability factor for everybody,” he said. “A lot of the PVC bags in today’s market are getting so expensive.”

Campbell’s bags are $85 for the small version and $115 for the larger size.

He designs the pieces out of his Beverly Hills space and then produces overseas.

The Beverly Hills native didn’t grow up around accessories and apparel so getting the business off the ground was a big learning curve. He spent about six months getting the design down and then sought a factory partner just as focused on quality as he was with the BH Mafia bags created from a single mold — as opposed to separate pieces later sewn together.

That was an important point for Campbell who was thinking about not only quality but utility, particularly at a beach.

“I wanted something that was solid. There’s no water or sand getting in,” he said. “The first part of this business was about being at the beach, at the resort, and not having to worry about that while still looking chic.”

While the bag has earned a big following, the label’s not looking to be a one hit wonder. There are already plans for a much larger tote that could be out as early as the end of this year. There’s also a clear PVC jacket due out next month that Campbell views as the start of more garments from the label. The jacket, pricing still to be determined, is inspired by the traditional denim jacket. For Beverly Hills Mafia’s signature bag, a rosé-colored version is also on the way.