Comprising eight styles, the new line nods to the brand’s roots of handbags made from exotic skins. 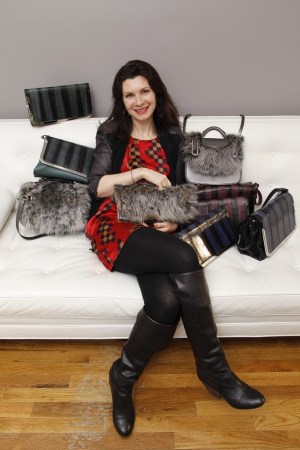 What Does a Handbag Brand for Busy Lifestyles Do in the Pandemic?

The contemporary handbag brand is launching a luxe collection for fall that will broaden the brand’s price range, and potentially reclaim its high-end consumer.

Called “Monica Botkier” after the brand’s owner and designer, the collection nods to the brand’s roots of handbags made from exotic skins. Comprising eight styles, the new line incorporates clutches, shoulder bags and satchels in shearling and water snake that are all priced under $1,000.

“This has been in the works for a long time,” said Botkier. “I’ve been looking back at my archives and how we were priced higher. We are successful at $495 and below but there’s still room for some collection pieces, and these [new] prices are still attainable for a brand like ours.”

Set to hit stores in September with a second delivery in October, the collection includes the Misha series, which is inspired by Botkier’s bestseller from its 2012 spring and resort collections, as well as the newly created Marlow series.

The Marlow series is a shearling-based collection that includes clutches for $845, crossbody bags for $895 and satchels for $995.

“Our label is evolving and our consumer has matured,” the designer said. “I feel we can infiltrate a market that consumers are craving. My vision is to sell to the department stores that carried Botkier when I was developing the line years ago, like Barneys and Bergdorf Goodman.”

Before the recession, Botkier’s handbags topped out at $900 and included more exotic skins, calfhair and python. Roughly 70 percent of her offering was more than $595, and the brand was in upscale department stores. Now, half of Botkier’s collection comprises bags under $400, which she dubs “the new sweet spot,” and it has taken on a more classic look, made primarily of leather.

In hopes of expanding her brand, Botkier said in December that she was on the hunt for an investor, but declined to comment as to whether she has been able to secure one.

Either way, the new luxe line is part of the nine-year-old company’s push to not only recapture its upscale following, but also extend its reach. According to the designer, there are several projects on tap this year, including one with Swatch to design a watch for the spring.