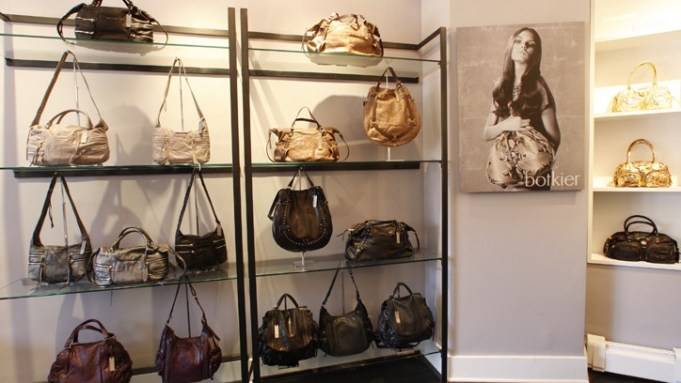 Creative director Monica Botkier launched the company in 2003 and has since sold its bags, shoes and small leather goods in stores such as Bloomingdale’s and Neiman Marcus, but said her dream was to open a shop of her own.

“Of course, I’ve always wanted a place to show my entire collection where it can shine and where I can express my vision,” Botkier said. “Being a New Yorker, there are so many great places downtown to have a boutique. This specific location has a great mix of people, both who live in New York and people who just hang around in the cafes and on the streets. There are also so many unique boutiques in the area. It’s not so megabranded, and that also sat well with me.”

Botkier partnered with interior designer Valerie Pasquiou on the look of the 500-square-foot “jewel box” space. A palette of gray, purple and black is offset by custom metallic accents. Botkier described the aesthetic as a “marriage of edgy and chic,” much like her vision of the brand itself. The designer expects the store to bring in about $1 million in sales its first year.

Botkier said she’s looking forward to interacting with her customer in a way she hasn’t yet been able to do, as well as exploring initiatives such as launching exclusive lines and special partnerships. Her most recent collaboration involves designing bags with Minnie Driver and Joy Bryant in support of the charity Oxfam International.

“We want to show our best face and have fun dealing with customers,” Botkier said. “There are certain things I’d always hear in the development phase such as, ‘We can’t do this, or the material is too expensive, or it won’t merchandise with the line.’ Now, I can entertain myself as a designer and make five pieces of something I love and put them in the store and give the customer a true sense of who Botkier is.”

The firm is also in the midst of revamping its logo, packaging materials and Web site, the last of which will feature a blog where Botkier and her employees will discuss inspirations behind the collections, as well as favorite pastimes or city destinations. The site will also include an updated e-commerce format, which Botkier introduced in 2004.