Bulgari is also expanding its luxury hotel network and Babin said the company will open its first unit in the U.S. in Miami in early 2024.

MILAN — Bulgari’s prospects in the accessories category continue to be solid, according to Jean-Christophe Babin, who was in Milan during Fashion Week to present the brand’s latest collection.

Babin was proud to introduce Bulgari’s first tote, meant for more a practical, daily use, marked by a special jewel-like chain motif that spells out the brand’s label on the side of its squared shape and clean lines.

To create the precious decor, two different chain sizes were employed — one for the logo and one for the frames, which are all assembled by the company’s expert artisans. Available in two different sizes and material combinations, the tote bag comes in black or a milky quartz calf leather with a grainy effect, as well as in canvas.

“Accessories, with jewelry, are the best-growing categories,” said Babin, adding that bag sales have recovered, reaching pre-COVID-19 levels of 2019.

The executive was optimistic about 2021, not only for the arrival of the vaccines on the scene and for an increased use of social distancing and masks. “I see a strong appetite for luxury globally and not only in Asia but also in Europe and the U.S. through local shoppers. There is a desire to spend that has already surpassed the levels of 2019,” he observed. “After so many sacrifices, customers have a strong desire for beauty and are ready to spend. They even have set some money aside as they have not had the opportunity to spend on trips, for example.”

Babin said Bulgari’s jewelry has been recovering well, but he shined a light on the power of a brand rather than that of a category. “I believe those companies that have been focused on quality, craftsmanship, helping out in these times, supporting those in need, the arts and culture, will be the winners. It will be more difficult for those brands that are less authentic and focused on enduring values.”

Babin has been raising the bar in terms of corporate social responsibility at Bulgari. Last June, as reported, the company revealed the creation of its Virus Free Fund, to finance research related to seeking cures to viruses along with a spate of other efforts on the CSR front. Bulgari has also helped restore the Spanish Steps in Rome.

The company has been further developing its network of luxury hotels, ready to capture that thirst for traveling pent up during the pandemic.

The first hotel in the U.S. will open in Miami in early 2024 “in a beautiful Art Deco building on 21st Street overlooking the ocean from three sides, which is rare there,” revealed Babin. “We are working to maintain its authenticity.”

Before that, Bulgari’s Paris hotel will open in September, a year later than expected because of the lockdown that impacted the works. “We have started working on the structure of the hotel in Rome which will open in October 2022, and in three months we will start on the more decorative aspects, the rooms and bathrooms — all as scheduled,” he offered.

As reported, the hotel will be strategically located in the central Piazza Augusto Imperatore, not far from the city’s Spanish Steps and Bulgari’s flagship on the luxury shopping street Via Condotti.

The hotel will occupy a stately rationalist building erected between 1936 and 1938 and designed by architect Vittorio Ballio Morpurgo, facing two must-see Roman landmarks, the Ara Pacis and the Mausoleum of Augustus, the first Roman emperor, a site that is under renovation.

The Bulgari Hotels and Resorts Collection comprises six properties in Milan, London, Bali, Beijing, Dubai and Shanghai. Openings in Tokyo are expected at the end of 2022 and in Moscow in early 2023.

Among its range of new accessories presented in Milan, Bulgari also introduced a raffia material in the Serpenti Forever collection and a new maxi chain over the archival snake head motif.

Another novelty was a matelassé bag with bold quilting and a new color palette, including a sophisticated pink hue. 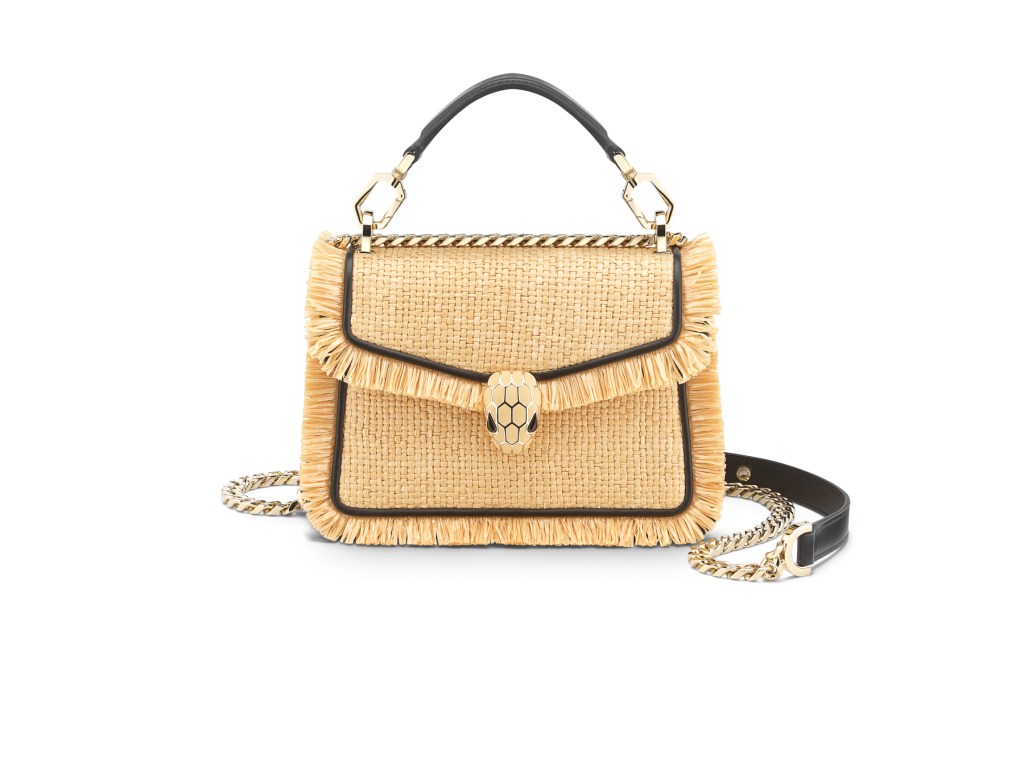