The Rome-based jeweler on March 21 will launch the "Bulgari Serpenti Through the Eyes of Mary Katrantzou" collection with a digital and editorial campaign fronted by Natalia Vodianova.

A design from the new "Serpenti Through the Eyes of Mary Katrantzou" collection.

The Rome-based jeweler on March 21 will launch the “Bulgari Serpenti Through the Eyes of Mary Katrantzou” collection with a digital and editorial campaign. This will be fronted by Natalia Vodianova lensed by French fashion photographer Hugo Comte.

The three new Serpenti styles point to the metamorphosis of the snake and for the campaign shoot, Vodianova wears luxury jumpsuits specially created by Katrantzou for the occasion, which exemplify the Greek designer’s whimsical creations and their craftsmanship. 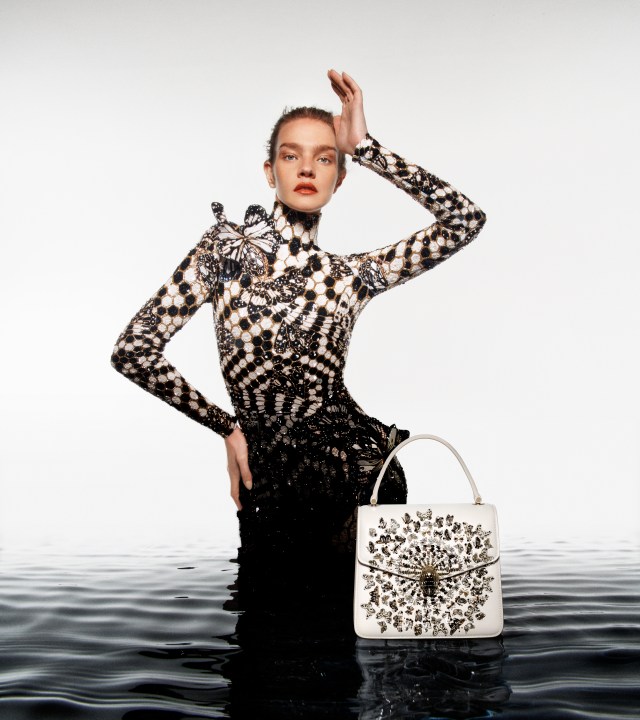 Natalia Vodianova in the “Bulgari Serpenti Through the Eyes of Mary Katrantzou” campaign.  Hugo Comte-courtesy image

Katrantzou said that in her reinterpretation of Serpenti she “wanted to highlight the importance of its symbolism, which dates back to Ancient Roman and Greek mythology. Drawn to the idea of metamorphosis, my intention was to highlight the Serpenti as a symbol of rebirth, transformation and healing. Metamorphosis refers to transformation, everyone experiences their own journey of growth and we all go through some type of metamorphosis through life, which is why the Serpenti has a lot of meaning to me.”

The designer said she was inspired by Bulgari’s Serpenti high-jewelry bracelets and watches designed in the ‘60s. “I wanted to recreate that movement in the form of a bag handle and we designed our own Serpenti handle and clasp. The shape of the bag itself is inspired by the curved lines of the Serpenti body, and I wanted to accentuate the femininity of the lines, working closely with the incredible leather craftsmanship of the Bulgari artisans.” 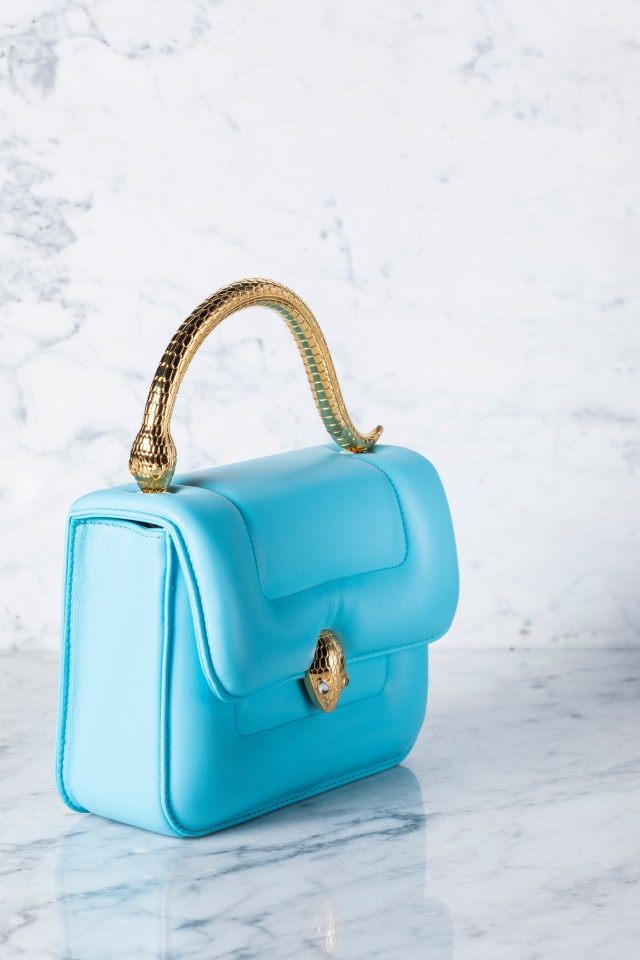 Creating a limited-edition minaudière, Katrantzou’s aim was “to create something truly unique” and, to this end, she brought the signature Serpenti head “to the forefront of the design, I wanted to use its shape to define the silhouette, which was a Bulgari first.” 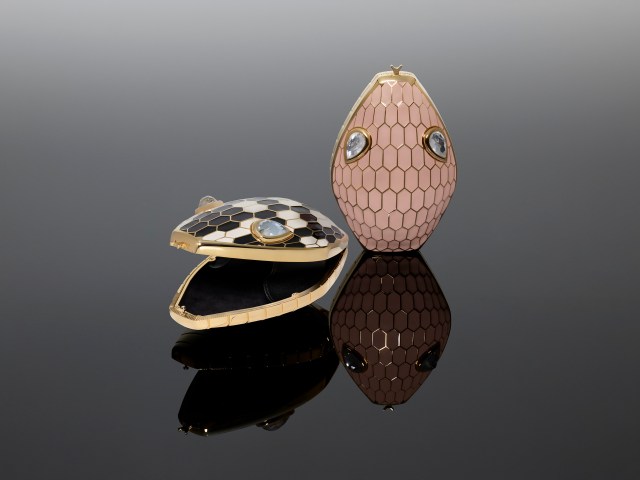 Minaudières from the “Bulgari Serpenti Through the Eyes of Mary Katrantzou.”  courtesy image

Bulgari’s chief executive officer Jean-Christophe Babin said “to talk about innovation in the world of luxury, we often have to start from icons. Symbols that define the character and the style of a brand. This is Serpenti for Bulgari, in a metamorphosis that has been able to transform itself over the years and keep up with the times through the power of the imagination.”

The “Serpenti Through the Eyes of” series stemmed from this idea and Bulgari has previously collaborated with designers such as Nicholas Kirkwood and Ambush. The luxury company also created a capsule with Fujiwara for Japan and one with Avellaneda for Spain.

“The icon allows itself in its transformation in the eyes of young designers who, like Mary Katrantzou, know how to create a perfect blend of style, glamour, creative vision and excellent craftsmanship,” quintessentially Bulgari, he concluded.

Once the Metamorphosis theme was decided, Katrantzou “felt the campaign also needed to be centered around a woman who embodies the notions of femininity, evolution and rebirth.”

She said that she “immediately knew Natalia had to be the face. We both felt it would be wonderful to also partner with her charity, the Naked Heart Foundation, to support their cause and communicate our collaboration about the power of design to be meaningful.”

The designer praised Vodianova’s “grace, generosity of spirit and compassion,” the same values she believes in and which Bulgari stands for, she noted. Vodianova “is a mother, a wife, an entrepreneur and a philanthropist and to me that is the face of strength.”

In this context, Bulgari has made a donation of an undisclosed amount to the Naked Heart Foundation, created by Vodianova in 2004, committed to supporting children and adults with special needs.

“As a model I had the chance to put my life and my success at the service of children and families with special needs,” Vodianova said. “This is why I felt specially connected with the collection’s concept of metamorphosis and the reason I wanted to inspire others to believe that compassion for others can be transformative in their lives.”

As reported, last month Babin said Bulgari’s prospects in the accessories category continue to be solid.

Accessories, with jewelry, are the best-growing categories, said Babin at the time, adding that bag sales have recovered, reaching pre-COVID-19 levels of 2019, and seeing “a strong appetite for luxury globally and not only in Asia but also in Europe and the U.S. through local shoppers. There is a desire to spend that has already surpassed the levels of 2019.”