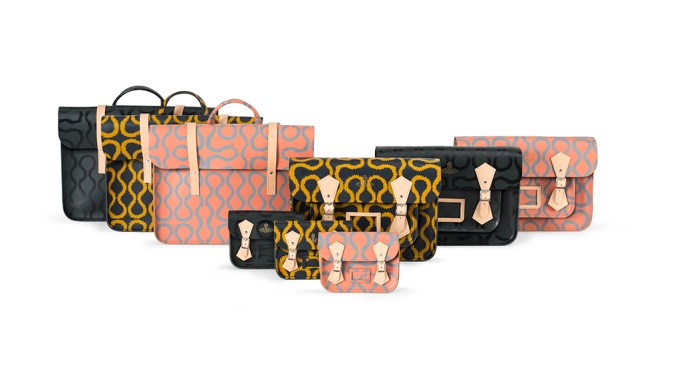 LONDON — The Cambridge Satchel Company has collaborated with Vivienne Westwood for a second time around, and in July will launch a limited edition collection of bags in Westwood’s famed squiggle print.

The print — which first appeared in Westwood’s fall 1981 collection, Pirate — comes in three different color combinations of printed leather on the bags: green and black, tea rose and gray, and navy and yellow. There is also an oxblood and red color combination, which will be sold exclusively in Vivienne Westwood stores and on The Cambridge Satchel Company’s site.

The bags’ design takes its cues from the Pirate collection, too, with the tan buckles fashioned to resemble the bow-shaped buckles on Westwood’s sought-after pirate boots.

Julie Deane, founder and chief executive officer of the Cambridge Satchel Company, described the Pirate collection inspiration as “so true to Westwood.”

“Whenever we do a collaboration, it’s really important you see both parents,” said Deane. “If you look at the pirate boot and then you look at [the bags], you realize instantly where [the inspiration] has come from.”

The collection is limited, and will launch on July 7 at Vivienne Westwood boutiques, The Cambridge Satchel Company stores and its online store, cambridgesatchel.com.

And ahead of the launch, The Cambridge Satchel Company is set to unveil on June 8 its first men’s store in London’s Covent Garden, on Shorts Gardens, a cobbled street in the Seven Dials area. The opening will see the firm debut 50 new styles specifically for men, including its satchel-style Bridge Closure bag, a tablet-shaped Map bag and a Folio backpack, all in leather. Deane noted that the new store is “inspired by British outfitters and British production techniques … [with] a bit of an eccentric British home element to it.”

Next up, the firm is looking further afield with plans to expand overseas, with Deane saying that the label is plotting to open spaces in the U.S. and China this year.