With new partner L & Leung, the designer is focusing exclusively on bags with leather and calf hair looks that mimic his main collection’s concepts. 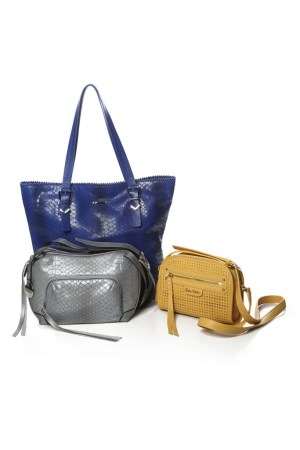 For Carlos Falchi, the second time around is in the bag.

Two years after the Brazilian designer launched a contemporary collection with sourcing firm Li & Fung that failed to take off, Falchi is at it again, this time with new partner L & Leung, which also produces handbags for brands that include Iris by Iris Apfel, Carlos by Carlos Santana and Emma Fox.

The former Falchi by Falchi contemporary line of bags, shoes and jewelry had one shipment to Macy’s for its Brazil promotion. Falchi had also tapped Li & Fung to take on production and distribution for his main “couture” collection. “The Macy’s promotion did well at retail, but when it came to production, we both realized that small U.S. production was not their niche and my couture line has always been made in the U.S.,” said Falchi, who also sells his moderately priced Chi by Falchi brand of bags, jackets, watches and hats exclusively on HSN.

For Falchi’s second go at contemporary, he’s focusing exclusively on bags with leather and calf hair looks that mimic his main collection’s concepts (even the brand name is the same) but with prices that retail from $228 for a cross-body camera style to $348 for a North/South tote, capping out at $598 for an oversize calf hair bag. L & Leung president Lisa Nunziata said her goal is to create a collection that’s strong on brand, leather and function. When asked if she was concerned that customers might confuse the main line and the contemporary one, she replied, “We don’t want them to know the difference.”

Design director Steve Quiles, formerly of Lucky Brand, said the contemporary line’s interest is in the details, from the adjustable buckle on the Y-shaped shoulder straps of a cross-body style to an appliqué in a chevron pattern on a crescent-shaped hobo. A python print, a croc embossment and a cobra pattern burnout have a similar exotic look of the main collection. All the leathers are sourced in Brazil, with the bags produced in China.

The line makes its debut in market this week and is slated to hit retail for a May-June transitional delivery.