Christie's will hold its first New York live handbag auction on December 11, as the auction house intensifies its efforts in the new division. 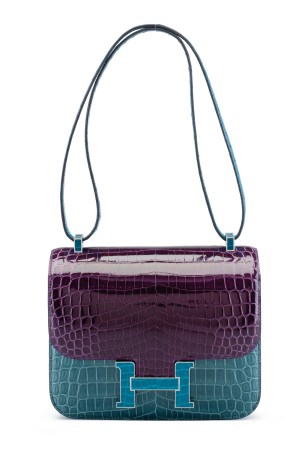 On Dec. 11, Christie’s handbag division will bring a swath of polished exotics under the gavel for the firm’s first-ever New York live-auction, at its Rockefeller Center headquarters here. Christie’s has estimated that auction will raise up to $3.6 million in total sales, buyers’ premium excluded.

The sale is comprised of 223 lots, the majority of which (188 lots) are Hermès. Another 17 are Chanel, with some 11 Judith Leiber and six Louis Vuitton pieces, supplemented by a single Valextra style. Some of the most spectacular, rare pieces include a 32-centimeter matte Himalayan crocodile Kelly with palladium hardware (estimated up to $70,000) and a 35 cm amethyst crocodile Birkin with diamond-encrusted hardware (estimated up to $150,000).

Custom-ordered designs, a privilege reserved for Hermès’ top echelon of clientele, are also on the docket with interpretations of classic styles such as the Birkin and Kelly in particularly individualized fabrications, like patchwork neon leather.

The New York sale represents Christie’s growing investment in handbag sales, a division that U.S. handbag specialist Caitlin Donovan labeled as “one of the only female-centric collecting categories.”

“In other categories like jewelry, women are receiving but are often not the ones transacting and bidding. I think the auction industry really needed to buckle down and find a category in which women enjoyed buying and selling,” she said. Donovan would not disclose the category’s exact gender ratio, but did confirm that it skews overwhelmingly female.

She said that the division’s lots are meant to appeal to a wide range of bidders, from those seeking their “starter Birkin,” to those “who have rooms in their house devoted to bags.”

In the year since entering the category, Christie’s has made an aggressive play to build out its handbag business. The firm conducted its first live handbag sale in Hong Kong on Nov. 24, 2014 and has mounted three sales since — another in Hong Kong and two in Paris. Its March 9 sale in the French capital realized double its original estimate. The company has also conducted multiple online sales and e-boutiques solely devoted to handbags.

Though handbag auctions have strong ties to fashion, Donovan pointed out that the category has many characteristic overlaps with Christie’s stalwart art, jewelry and watch divisions — particularly its buyers’ mind-set of approaching lots as financial investments.

“If you look at the handbag industry as a whole, it’s a $3 billion industry. It makes sense that there is some sort of investment value to be had,” she said.

As with watches and jewelry, the rarity, craftsmanship, and worldwide demand dictate the bags’ estimated prices. For this reason, Hermès’ limited supply chain makes it the hottest contender on the secondary market. Limited-edition, notable runway styles by Chanel and Louis Vuitton are also considered valuable assets.

But unlike in many jewelry, watch, and art auctions, the handbags’ provenance is not revealed to bidders. Donovan said that a prior big-name owner does not add to the lots’ ultimate value, as most of the bags are sold in unworn, premium condition.

The New York Handbag & Accessories sale will begin previews on Dec. 4, running through Dec. 10. The display will be mounted in tandem with a preview of Christie’s forthcoming Magnificent Jewels sale.