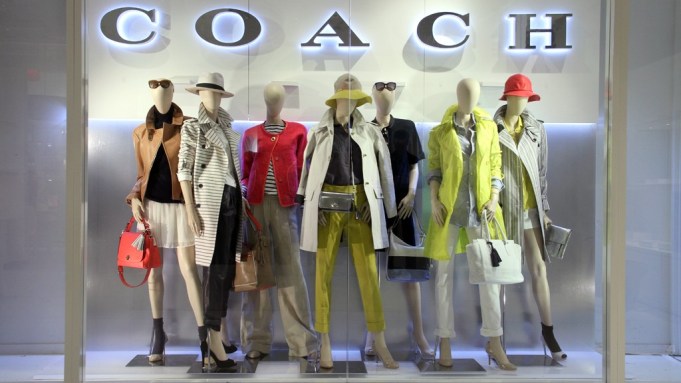 Coach Inc., the handbag and accessories titan, is entering what it calls a transformational period in which it hopes to emerge as a full-fledged global lifestyle brand in the eyes of consumers.

Starting with an “amplified” rollout of footwear this spring — which will be followed by an increase in secondary categories such as men’s and women’s apparel, outerwear, watches and jewelry, as well as a new store look — Coach is in the process of redefining the brand. That redefinition, which will be in full bloom by holiday 2013, puts the company in even more direct competition with other lifestyle players such as the fast-growing Michael Kors and Tory Burch, both of which have nibbled away at Coach’s still-dominant share of the North American handbag market.

While the changes have been at work for almost a year, the brand reinvigoration comes at an opportune time. Coach reported weaker-than-expected second-quarter earnings today and turned in its first quarterly negative same-store sales figure since the recession hit.

“The reality is that the marketplace has shifted,” chairman and chief executive officer Lew Frankfort told WWD in an exclusive interview. “We’re responding transformationally to take advantage of the opportunity. It’s not as if we’re static.”

The “disappointing” results were pulled down by the company’s women’s handbag business in North America, according to Frankfort, who said comparable-store sales in North America fell 2 percent. This marked only the third time in 11 years that Coach registered a negative comp. It registered negative comps in the second quarter of 2002, following 9/11, and in January 2009, following the financial collapse. The flagging comps were offset by strength in Coach’s international business, led by double-digit same-store sales growth in China.

Although the company acknowledged new competitors, Coach said macroeconomic factors, such as the impact of Hurricane Sandy and uncertainty surrounding the fiscal cliff, played a role in the weaker results. The handbag maker also cited its decision to refrain from promotions during holiday even as competitors increased markdowns.

“The reality is that we gained on margin where we lost on sales,” Frankfort said, noting that gross margins for the quarter remained flat at 72.2 percent of sales.

Coach’s new direction is rooted in the desire to speak to the consumer from an “emotional way” rather than a “functional one,” according to Reed Krakoff, the brand’s president and executive creative director, who informs the design of the collection and store layout.

Frankfort added: “By doing this, and impacting our windows, our store environments, Internet, marketing, all consumer-facing elements, it’s going to have a profound impact on consumers’ perceptions of Coach because it’s unexpected.”

Consumers have seen an early iteration of the lifestyle push in the brand’s Legacy collection, a vibrant, dual-gender footwear, accessories and apparel line that hit stores last summer. That higher-priced collection not only sparked the transformation of the brand’s advertising and in-store merchandising, but also provided consumers with a new lens through which to view the New York-based heritage leather bag maker.

“We’re taking a 360-degree look at everything we do and how we approach the consumer,” Frankfort said. “People don’t buy a collection, they buy an item. This will heighten the cachet of the brand.”

According to the ceo, the market for luxury handbag and small leather goods priced over $300 is $3 billion, and that’s a market that the brand hasn’t fully tapped — Legacy withstanding.

Currently, Coach’s sweet spot for bags in North America is $300. The price range is a threshold the brand has been trying to conquer since the economic downturn in 2008, when the bulk of its offering was priced over $300.

In the most recent quarter, Coach said it’s making headway with bags priced over $400. In North America, bags priced about $400 made up 20 percent of its holiday handbag business versus 16 percent a year ago. The sweet spot for bags priced above $400 was $460.

“It validates our belief that there’s a larger opportunity at higher price points,” the ceo added.

Instrumental to Coach’s transformation is a curated capsule collection that will flow into stores on a quarterly basis and inform the fashion direction of the brand’s collection. The collection of looks will encompass handbags that range from $500 to $800, and comparably priced footwear and apparel.

“It’s really expanding the attitude,” said Krakoff. “You can’t go in thinking about price. It has to start with whether it’s something you really love.”

For Coach, the challenge begins at the store level. While with the launch of Legacy, Coach was able to infuse the store windows with a whimsical nod to its heritage with vintage-inspired bags, which are sleeker and more colorful than their predecessors, windows remained accessories-centric.

That will change starting in August, when displays will incorporate all categories, from apparel and footwear to eyewear and handbags.

In terms of product, the “evolution” of Coach will begin with shoes, offered Krakoff, who explained that, through the brand’s licensing deal with Jimlar Corp., the company will “elevate” its offering.

Led by former Camuto Group president Javan Bunch, who was hired as senior vice president of licensed businesses, footwear will have a greater presence in roughly 100 stores starting this spring. Additionally, roughly 50 of Coach’s global flagships will have in-store shoe salons.

Coach has also hired Sandra Hill to head up women’s design. Hill, who most recently served as Bonobos’ vice president of creative design and joined the firm last week, is perhaps best known for her 16-year stint at Paul Smith, where she worked as the brand’s creative design director of women’s wear.

In the past, Coach has insisted it wouldn’t do women’s ready-to-wear. The addition of Hill represents a shift in strategy at the company, which confirmed it is focusing more on clothing even as it will remain accessories-centric.

“She understands how to tell a story,” Krakoff said of Hill. “We’re creating a network of talent. As opposed to being an accessories brand, we’re much more inclined to see the brand as telling the story of the total lifestyle, meaning we need to have a way to see Coach in a different way.”

Krakoff, whose designs for his namesake label were worn by First Lady Michelle Obama at Sunday’s swearing-in ceremony, is really tasked with changing Coach existentially.

A large load of that burden will weigh on the development of the women’s business. But even though it makes up about 12 percent of the overall business, the men’s division is, in some ways, closer to embodying Krakoff’s lofty brand objectives.

“It [the men’s business] is a more holistic assortment than we have on the women’s side, but we’re moving towards that,” said Frankfort, lauding men’s creative director Jeffrey Uhl, another recent hire, who has played a significant role in developing the leather-centric, lifestyle-focused division.

“We have a world-class-level design team now,” said Krakoff with a hint of excitement. “We are creating a new expression for the brand. Our design process is entirely different. Fashion is about a dream. We really have to dream a bit.”