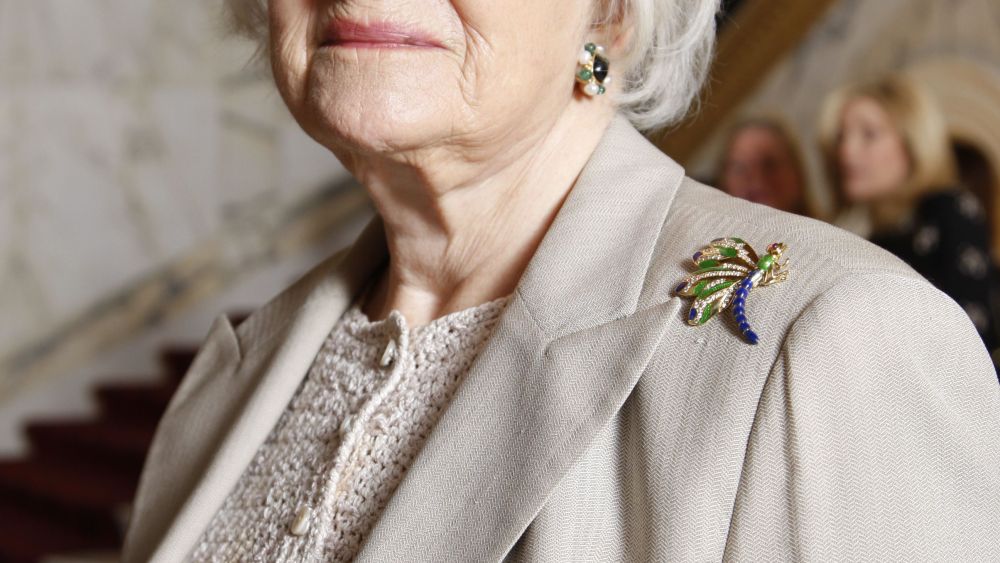 Handbag designer Judith Leiber died Saturday at her home in Springs, N.Y., only a few hours after the death of her husband, abstract painter Gerson Leiber.

Both Leibers were age 97, according to Ken Yardley of the Yardley and Pino Funeral Home in East Hampton, N.Y. They died of natural causes, he said.

Tracy Margolies, chief merchant at Saks Fifth Avenue, said, “We’re deeply saddened by the loss of designer Judith Leiber. Judith was an extraordinary handbag designer, a true master craftswoman, not to mention a loyal partner and friend of the Saks Fifth Avenue family.”

I’ve always admired and appreciated the originality of Judith’s designs. Her handbags — from the intricate embellishment to her whimsical motifs — were true pieces of art. She was one of a kind, admired by all and will certainly be missed.”

Judith Leiber was born Judith Peto in Budapest, Hungary, on Jan. 11, 1921, to Emile and Helene Peto. She grew up to become the Queen of Minaudières, whose fanciful designs — including animals and vegetables — were carried by a long list of first ladies, beginning with Mamie Eisenhower, along with many wealthy social women and movie stars. Leiber gave each first lady one of her minaudières as a gift. Greta Garbo, Elizabeth Taylor, Claudette Colbert, Anne Bass and Barbara Walters also carried them, while Beverly Sills was a big fan and had a large collection.

Before the war, her father sent Judith to University College, London to study chemistry, which he believed would help her become a chemist in the cosmetics industry. He also hoped it would keep her out of the way of World War II. When she returned to Hungary, however, the war broke out. Her family was Jewish, but her father, a commodities broker, ran the grain business for a big bank, and he was able through connections to get his family into a safe house for Swiss citizens. Toward the end of the Nazi period, this safe house was disbanded. Though her family was sent to a ghetto, they survived the war.

“When I was a young girl, my father used to go [on trips] to Western Europe,” she told WWD many years later. “He would always bring my mother a handbag as a gift. My mother always loved her handbags, and I loved them very much, too. So I decided that I was going to do that.”

Judith was apprenticed to one of the top handbag makers in her home city, where she learned how to do everything herself. It was an invaluable training period. “It was not a women’s industry,” she said to WWD. “I was the first girl in Budapest to apprentice in handbags. I thought that it would be a good way to immigrate to the U.S.”

She also began selling her bags to members of the armed forces. She met Gerson Leiber, known as Gus, an American who was stationed in the city as a member of the U.S. Signal Corps and, she said, “It was love at first sight.” She asked him whether he knew someone in the service who would like to rent a room in her parents’ house. He didn’t, but he soon became captivated by this young woman, who spoke excellent English, as he later recalled. He began to court her. They married at her parents’ place in 1946 and then moved to New York.

Judith worked for several handbag manufacturers, where it became clear that she was one of the few women who could not just design, but could make a handbag from start to finish. In 1993, she observed to WWD, “Today, most kids want to be designers, but they don’t want to get glue on their fingers.”

In 1953, she created a pink rhinestone bag at Nettie Rosenstein for Mamie Eisenhower to carry to her husband’s presidential inauguration; it caused a stir. Gerson suggested that she go out on her own. But it took 10 years. In 1963, they began with a factory and four other employees.

One early reference to Leiber in WWD is from 1968, and the sketches show designs including owl and swan minaudières. Leiber’s evening bags took the form of everything from peacocks to piglets and penguins, along with cats, lions, rabbits, frogs and dogs, with inspiration from Fabergé eggs to Mondrian paintings, all sparkling with 5,000 to 8,000 rhinestones and even semiprecious stones. She created other luxurious bags, often in exotic skins such as ostrich, alligator, whipsnake and frogskin, but the playful minaudières amounted to about 40 percent of her business. Saks Fifth Avenue, Marshall Field, Henri Bendel, Neiman Marcus, I. Magnin, Bloomingdale’s and Amen Wardy were some of her top retailers, and she had a shop-in-shop at Bergdorf Goodman.

In 1973, she became the first woman in her field and the first accessories designer to win a Coty Inc. award. In 1980, she won a Neiman Marcus award, and in 1986, she won the Spirit of Achievement Award from the N.Y. Chapter, National Women’s Division, Albert Einstein College of Medicine of Yeshiva University. In 1994, Leiber received the Lifetime Achievement Award from the CFDA.

Meanwhile, her husband, a painter, lithographer and sculptor, was continuing his own career while running the business side of the firm. He was always supportive of her endeavors and came up with many ideas to enhance their enterprise.

She observed that it took about five years to train beaders to spangle her bags. In 1981, she told WWD, “Our industry is shrinking by the second. Years ago, with immigration, you could hire talented people from Italy, Germany and Hungary. Now no one knows how to make a bag from start to finish. It’s all section work.”

The original idea for her best-known bags, she told WWD in 1998, “was a variation on the solid gold evening bags women once carried. Solid gold bags were timeless and classic, but they also were expensive. Women constantly had to go from parties to the vault, where they kept the bags. I started putting rhinestones on brass, beginning with partly beaded bags and then, full beading.’”

In 1993, when she sold her firm to Time Products PLC, she estimated that she had created about 4,000 styles of bag during her lifetime, saying she usually designed 100 styles each year. Her firm was later sold to the Pegasus Investment Advisory Group. Judith Leiber retired in 1998. Authentic Brands Group later acquired the brand and, last year, Dee Ocleppo Hilfiger became a co-owner and its creative director. Last week Hilfiger revealed to WWD that the brand plans to expand into children’s wear, footwear, apparel and jewelry.

“Judith Leiber was a woman who I have and will always greatly admire,” said Ocleppo Hilfiger. “She not only was a Holocaust survivor and endured some of the most unthinkable conditions, but single-handedly managed to build one of the most unique and recognized American luxury brands today. I am incredibly honored to have the opportunity to continue her legacy. I look forward to paying tribute to her well-lived and inspiring life, as well as her marriage of 72 years with Gerson.”

In 2009, the Leibers set up a museum for her handbags in East Hampton. Her bags are also in the collections of the Metropolitan Museum of Art in New York, the Dallas Museum, the Museum of the City of New York and the Smithsonian.

In the fall, winter and spring of 2016 and 2017, three exhibitions about Judith and Gerson Leiber’s works were mounted in succession. They were “The Artist & Artisan” at the Flomenhaft Gallery, which opened in November 2016; “Brilliant Partners: Judith Leiber’s Handbags and the Art of Gerson Leiber” at the Long Island Museum of Art in Stony Brook, which was launched in February 2017, and “Judith Leiber: Crafting a New York Story” at the Museum of Art and Design, which opened in April 2017.

“I am deeply saddened by the passing of Judith Leiber and her husband painter-printmaker Gerson,” said Samantha De Tillio, assistant curator at the Museum of Arts and Design, and curator of “Judith Leiber: Crafting a New York Story.” “Leiber was a visionary designer, craftswoman of exemplary skill, and a fierce businesswoman. Over the course of her 65-year-long career, she overcame unimaginable hardships, and yet through her own determination, as well as her incredible skill, went on to establish a world-renowned handbag company. Leiber’s seemingly endless innovation and impeccable standards of craftsmanship are epitomized by her famed sparkling minaudières, especially her well-loved animal and food clutches, which propelled her to an iconic status among the fashion world, celebrities and first ladies. Leiber leaves behind a legacy that transcends fashion; she broke new ground and raised the glass ceiling for women designers and entrepreneurs.

“My memories of Judith, while organizing ‘Judith Leiber: Crafting a New York Story,’ are of an elegant woman, quiet and stately in her demeanor. She was generous with her time and stories, and welcoming during my visits to her museum and home. She and her husband had an inspiring rapport that comes only after sharing many long decades; their mutual support and respect of each other’s work, and affection for one another was palpable. Judith was so clearly adored by those closest to her, and will be greatly missed,” she added.