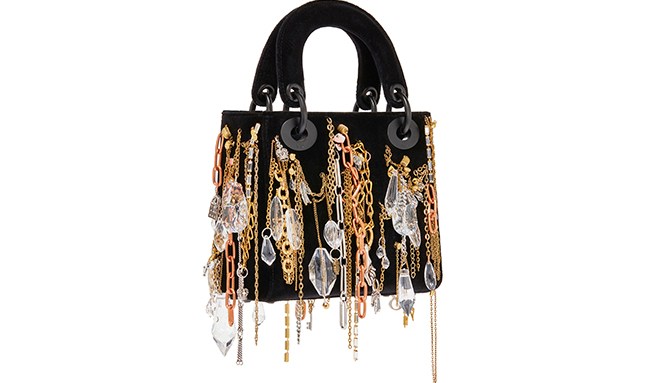 PARIS – “Why have there been no great women artists?” asked the slogan T-shirt that opened Maria Grazia Chiuri’s spring 2018 show for Dior. The latest edition of the Dior Lady Art project hopes to consign that question to the history books by tapping a list of exclusively female artists to customize the Lady Dior handbag.

The sentence was the title of a 1971 essay by art historian Linda Nochlin that examined the hurdles that have prevented women in the West from succeeding in the art world. Arguably, many of those obstacles still exist, but as this year’s selection — the first to be curated by Chiuri — shows, women artists have never been more influential.

Take Mickalene Thomas. Known for her paintings, collages and photographic portraits representing African-American women against lush backdrops of patterned fabrics, rhinestones and enamel, Thomas has emerged as a major force on the U.S. arts scene.

The fashion world has taken notice. After photographer Juergen Teller was accused of plagiarizing her aesthetic for a Vogue Paris shoot featuring Rihanna, Harper’s Bazaar, W and T magazine recently commissioned Thomas to shoot editorial spreads, including the cover of W’s art issue featuring Cardi B.

“Controversy and things that are provocative, good things come out of that. Because of that, people started looking at me,” Thomas told WWD. “In the end, it’s a benefit. You hope that people begin to recognize your creative talent. You do your work, you work hard and you keep pushing it along, and they’ll catch up to you.”

Thomas is one of 11 artists who designed bags for the third edition of the capsule collection, which will bow at the Dior boutique in Miami on Dec. 4 ahead of Art Basel Miami Beach. This will be followed by an event in Shanghai on Dec. 13, before the line, priced from $5,000, rolls out in January to 23 stores worldwide and online.

The artist, who often uses textured paper she buys at a Michaels craft store, worked with the Dior teams to source similar fabrics. “It wasn’t necessarily a one-to-one, but it was really trying to transform and work with the materials that we could find to communicate the same language,” she said.

Her patchwork design is inspired by “Tête de Femme,” a series of Cubist-inspired abstract collages shown at the Lehmann Maupin gallery in New York City in 2014. “Dior is a global and universal brand, so it just made sense to use something within my work that was speaking universally,” Thomas explained.

Made of black patent calfskin embroidered with multicolored beads, threads and organza, the bag is designed as a sensory experience. “It’s the one part of my work that you can touch,” she said with a laugh. “It was very nice to create something where the person can actually really feel the different textures of the bag.”

Though she has collaborated with young designers in the past, this marked her first time working with a major luxury brand. Thomas hopes to use some of the techniques she learned to make the collages she will present in her solo show at the Nathalie Obadia gallery during Paris Fashion Week next October.

Dior gave them carte blanche to customize its best-selling handbag, created in 1994, by playing with its cane-work quilting pattern and letter charms. They embellished their designs with materials such as 24-karat gold, transparent lenses, natural stone, linen ropes, metallic chains and embroidery designed to look like moss.

Li spent some time attempting to translate her large-scale airbrushed canvases, featuring abstract patterns that play with color and light, into a design fit for everyday use. “It’s quite challenging to design a bag,” she noted. “It’s like a box — you can put your own style into that box. It’s also like a test, like an exam.”

She had a holographic pattern printed on polyurethane embossed with small circles evoking insect eyes. Charm letters made of gold-colored metal spell out the Dior name, while an oval charm in gradient blue metal evokes one of her recent smaller-format circular paintings.

“It’s all about the human-made lighting and the digital life which surrounds us,” said Li, who has also been thinking about the impact of artificial intelligence on human existence. “We created these whole elements, whole surroundings, and we don’t know if we can control these monsters.”

Part of a group of rising young Chinese artists, Li took part in the Asia Now art fair that ran in Paris from Oct. 17 to 21, showing works including a video titled “Marriage Certificate” that shows her getting spanked by her husband, musician Li Daiguo, among other intimate activities.

The fair’s organizers reported that New Galerie, which represents her in Paris, sold all the works, priced between 3,800 euros and 15,000 euros. But Li noted that women artists still face hurdles in China, comparing the state of gender parity there to the situation in Western countries 20 years ago.

“I’ve always, not really ‘suffered,’ but still been treated as a woman in some unfair way, in many ways, so I’m glad and proud to live in this moment, because we are really changing something,” she said.

“This is our moment to show the real work that women did or are doing. For me, I don’t think we are fighting for half rights, we are fighting for the whole rights. If we do well, maybe after 20 or 30 years, nobody will be able to judge you as a gender. We will just be considered as professionals,” Li Shurui said.

Thomas is grateful for the women who have paved the way for her, and hopes to make things easier for those who come after her. “Women in the arts are still fighting for particular space on levels like being financially rewarded, being recognized on many levels and being in institutions, or just being collected,” she noted.

“I know I won’t have the same benefits of women and people of color who are the next generation. The possibilities for them, I’m hoping, will be even better. There won’t be a need to have the conversation about it or point out that it’s all women. We’re just artists, right? Hopefully, that will be the conversation,” she concluded.