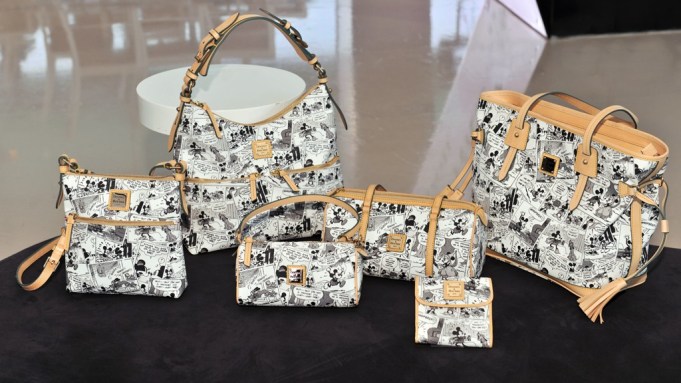 TOKYO — Disney and Dooney & Bourke are launching a line of handbags and small leather goods, hoping to tap into Japanese women’s penchant for character goods and cutesy accessories.

The initiative features a lineup of tote bags, wallets, small shoulder bags, pouches and subway pass cases. Made of plasticized canvas with leather trim, they feature two design motifs, one of a black-and-white Mickey Mouse comic strip and the other featuring red Minnie Mouse bows against a black background. The silhouettes and shapes are quite similar to the bags Dooney & Bourke created for the Disney theme parks in the U.S. and Disney Store e-commerce site.

“We sell many things as you can see, but bags are one of those four pillars we think that we can do the best,” said Ando, adding that the other areas of focus are plush toys, mobile phone accessories and jewelry. “We really, really think there is a huge opportunity ahead of us.”

The Disney executive declined to give a sales forecast.

Ando, a former Ermenegildo Zegna Japan and Gucci Japan executive, said the Disney Store has seen success with the low- and midrange handbags it has sold in the past and it hopes to capitalize on that momentum.

“Because of my background, I know women here love bags and accessories, small leather goods,” he said.

In line with Disney Japan’s fashion push, Ando said the company is preparing to expand its jewelry offering next year, although he declined to give specifics.