For fall, the jewelry designer will enter his second category with a full collection inspired by pocketbook silhouettes from the Fifties and Sixties. 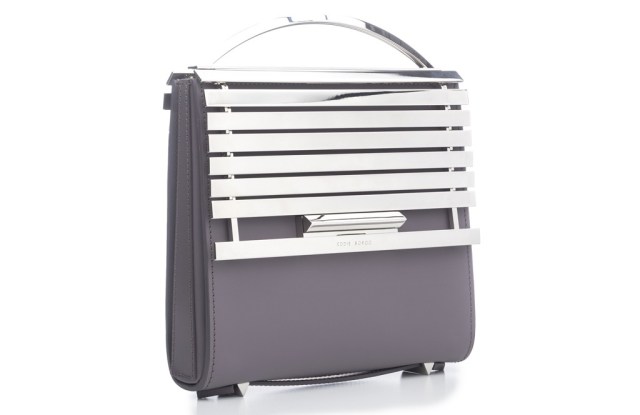 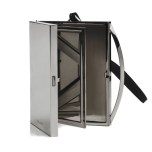 NEW YORK — Eddie Borgo is getting into the handbag game.

For fall, the jewelry designer will enter his second category with a full collection inspired by the geometry and function of pocketbook silhouettes from the Fifties and Sixties, with a nod to the innovations of the Industrial revolution. “The Industrial revolution is something we always look at with jewelry and reexamining the beautiful products that came out of that time,” Borgo said. “In my research, I heard all of my friends bitching about things that weren’t working with their bags — they’re too heavy, they can’t fit anything, they don’t open correctly. The functionality was a huge problem, so we were looking at this idea of a modern working woman and everything that she needs in her handbag.”

The final product arrives just under two years after the project was initially suggested to Borgo by Maureen Chiquet, global chief executive officer of Chanel and Borgo’s former mentor in the CFDA/Vogue Fashion Fund. “Once the opportunity was brought to me, I couldn’t let it go,” said Borgo. Through Chiquet, Borgo met with Dirk Bosteels, a handbag veteran who has worked with Karl Lagerfeld, Christian Lacroix and Sonia Rykiel in various sales and design roles. Borgo has since appointed Bosteels as chief operating officer of his company’s newly created leather goods division, with Sapna Shah acting as design director. Borgo noted that his current employees would now split their time evenly between jewelry and handbags.

The collection consists of seven styles, done in rubber coated and latex finished leather and high-grade Vachetta, with muted colors of jet black, evergreen, bush and “frost,” a subtle gray-purple. To keep weight down, Borgo used aluminum in the bags’ hardware rather than the traditional brass or white metal. Silhouettes include carry-all bags such as Colt, a day bag with a metal slatted flap, and Dean, a doctor bag-inspired splint-handled case, as well as variations of the clutch, seen in the Boyd, a handbag with rotating metal arc handle. Other styles enter a category of their own: the Vic, a caged metal minaudiere carried in a removable leather crossbody sleeve, and the Lou, a sculpted metal compact.

Function is the main thread throughout the collection, with interior pockets designated for specific needs: lipstick tubes, cell phones, metro cards, et al. Each construction detail — particularly the metal hardware — serves its own specific purpose. To work out these specifics, Borgo employed extensive usage of 3-D printing, going so far as to attend a number of tech-based seminars to learn more about the technique. “We produced all of the metal work in New York, and then created 3-D renderings of it that were fed into a machine that hand cuts all of the designs out of aluminum,” he explained. While initial metal designs were finalized in New York by Borgo himself, the final product will be fully produced in Italy; the leather itself will even come from Italy-bred cows. “The finish on the bags is very smooth because the cows are treated so well,” said Borgo. “They don’t have bugs eating their skin, which is why you’ll see bumps on leather. “

Price points for the collection range from $650 to $3,190. Though the collection won’t make its official debut until Feb. 21, with a private sale in London cohosted by Moda Operandi and Lauren Santo Domingo, Borgo has quietly shown the pieces to buyers over the past few weeks, and already secured distribution in a number of doors, including The Webster in Miami, Maxfield in Los Angeles, Jeffrey in New York and Atlanta, Forty Five Ten in Dallas and Colette in Paris. The designer noted that handbag projections are at double- and triple-digit increased growth for 2015 (comparatively, jewelry sales are up 47 percent year over year). With two categories to his name now, Borgo suggested that it might only be a matter of time until he enters the brick and mortar space with his own store. “It’s come up in conversation,” he said. “We now have a product offering that could fit a small store. Next steps for us would be a space in New York, and the launch of fine jewelry, which we’re hoping to have for the end of 2016.”