A portion of all proceeds of the “Emmy” bucket bag will go to the charity Safe Horizon. 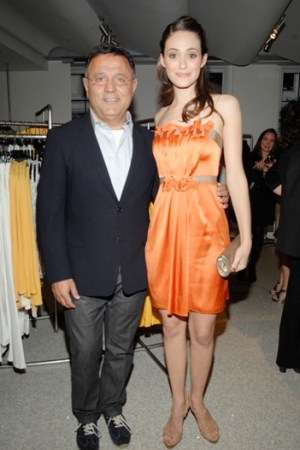 After years of wearing Elie Tahari’s designs and tailoring them to her liking, actress Emmy Rossum felt she had some constructive criticism to offer.

Tahari said, “I was talking to her about her style and I saw that she had good taste and she liked [my] bags. She’d say, ‘I wish it was this way, I wish it was like that…’ and I said, ‘You know what, Emmy? You come in and you design it like you like.’”

From there the idea for a handbag collaboration developed. A year later, the duo has revealed the creation of a leather “Emmy” bucket bag with cotton canvas interior, available in four sizes, in tan, black, white, mushroom, yellow and metallic. The Elie Tahari bags will be available for $398 to $798 beginning in March at retailers including Bergdorf Goodman, Neiman Marcus and Saks Fifth Avenue. A portion of all proceeds will go to the charity Safe Horizon.

Rossum said of the collaboration: “It blossomed very organically.”

When it came to the nitty-gritty of the handbag’s design, Rossum was concerned with the bag’s practical details. “I thought a lot about the kind of bag I wanted: versatile, worn by the working woman in any season,” she said. “It was important that it had compartments in the sides, because I hate those big bags where your iPod cord gets mixed in with your lip gloss.”

The creative process appealed to her. “I grew up singing in choirs at the Met Opera. When a new director would come in and have a new production…we got to work with our costumer to pick out our fabrics. It was a creative process behind the scenes, it was very exciting, and I always felt at home there,” she said. “So being part of that creative process [with Tahari], touching the leathers, picking the fabrics, thinking ‘What would I really want to wear?’ was great.”

Tahari concurred, “Besides it being fun, I think that she created a beautiful bag, it’s very interesting, very exciting. I think the fact that she’s involved…it’s good for our image as a company and it was just a good experience.”

Which isn’t to say an Emmy Rossum fashion line is soon to follow: “One thing at a time,” said Rossum. “I want to get really great at what I do first, then maybe later I’ll branch off. Right now I’ll leave it to the people who do it best.”

Rossum has evolved her own personal style since her cinema debut eight years ago as Katie Markum in “Mystic River.”

She’s recently taken to scouring vintage finds on eBay, “but I limit myself to options under $30.”

Rossum currently stars on Showtime’s “Shameless,” which she describes as “an outrageous show that lets us say crazy things and do crazy things.” She plays Fiona Gallagher, the eldest in a thoroughly modern, albeit dysfunctional family. “My character’s really not glamorous at all, which is a big change from what I’ve done in the past. I found it very liberating. Sometimes I find it a little intimidating to have to be glamorous. Here, you’re stripped down to what you really are, there’s not anything anyone can criticize. It’s like, ‘Go ahead, take a shot…’ Plus, boyfriends always say you look best in the morning, right?”

And have there been any such boyfriends recently? “I’m keeping my eyes and ears open, but I’ve got nothin’ goin’ on,” Rossum said.