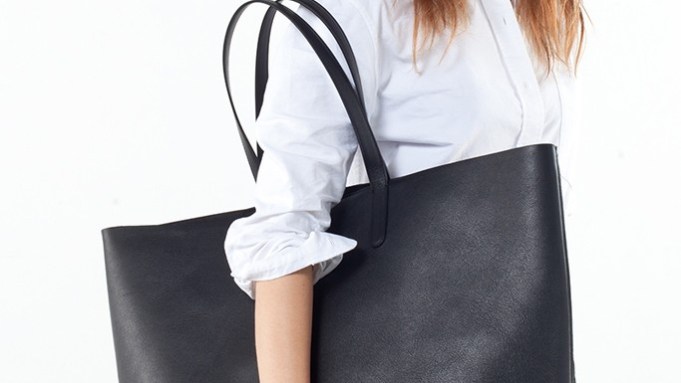 Everlane founder and chief executive officer Michael Preysman has a problem that many brands and retailers would envy: He ordered 1,000 of the e-commerce site’s new Petra bags, but has amassed a waiting list of close to 10,000 people wanting to get them.

Everlane didn’t set out to create an “It” bag for the digital age. Sticking with its straightforward design aesthetic, the company set out to make a simple bag that wouldn’t go out of style at a price that seemed reasonable, and order an amount that wouldn’t put its balance sheet totally out of whack.

“It is a very expensive product for us to make. We are a small company, and we don’t want to take a massive risk. We launched with a small number of units to say, ‘Is it something that people really want?’” explained Preysman, adding, “This is the biggest reception we have gotten for a product, so we are really happy about it. Obviously, every person on the wait list doesn’t result in a purchase, but it is doing really well.”

The Petra is not the first product that Everlane customers have had to wait for. The brand’s strategy of underordering to keep its costs manageable and avoiding merchandise markdowns has led to it constantly being sold out of items. Preysman said he has heard complaints from customers who can’t get their hands on product “all the f’ing time,” but that doesn’t mean Everlane’s wait lists are going away. To calm customers, Everlane clarified the reasons behind its product shortages in Facebook and Tumblr posts.

“Traditional brands can over buy because they overstock product, and if they need to, they can go on sale. Everlane never goes on sale, so if we can’t go on sale, we can’t have overstock,” said Preysman. “If a product is going to be successful, it is always going to be sold out, and it is until that product becomes a basic. If it has been in the cycle one to two years, we can see repetition and a history, and we understand we can make that investment. So, we are rarely sold out of T-shirts anymore, even though for the first year all I kept hearing is, ‘Why are you sold out of T-shirts?’”

The no-sales mantra at Everlane is a consequence of its promise that it won’t sell products at the higher markups seen at most retailers. While Preysman approximated accessories are regularly marked up six to eight times their wholesale cost, Everlane’s markup is around twice the cost for the Petra bags. Each Petra bag costs $190 to $210 to produce, and the bags are priced at $325, $365 and $425. “Typically, it would be at Barneys for over $1,000,” Preysman estimated.

The Petra bags are Everlane’s most expensive items — its T-shirts are $15 and it makes some 15,000 of them a month — and Preysman wasn’t sure if its customers would make the jump. Determining the price was more art than science. “We don’t test anything. We look at what other brands are doing all the time. We think about what our customers are willing to pay. We think about what we are willing to pay,” he said. “Pricing is extremely difficult. We try to be consistent and honest.”

The comparably thin margins at Everlane have made the prospects the e-commerce site would wholesale dim. “We can’t afford it. We sell to our customers at effectively wholesale, so selling to another retailer would break our model — we’d actually lose money,” said Preysman.

They have made profits harder to come by, too. Preysman said the company is currently breaking even. This year, he elaborated, “We are so much more comfortable. We are taking similar risks to what we took last year, but last year we felt that we were treading in deep water with the roof coming down. This year, we may be treading in deep water, but we are in a ship. We are more grounded in what we are doing.”

Everlane might not have the resources of a fashion conglomerate, but it hasn’t found signing on factories that make goods for those players that difficult. The Petra bags are produced in a factory in Venice that manufactures for global luxury brands as well. Preysman said Everlane used a consultant who works with Kering and LVMH Moët Hennessy Louis Vuitton to identify four factories that could do bags at the quality it desired, and eventually narrowed the choices down to one. In total, Everlane employs around 11 factories to make merchandise across all its categories.

“We try to find entrepreneurial people that believe in the story of Everlane, so we can build something together that’s much bigger. We need someone that can do something small, but can also do something big,” said Preysman. “We are very streamlined in the way we operate, so they really appreciate it, and we are playing the same cost [as larger brands]. We find one to two styles that we believe in and invest heavily in those styles.”

Preysman expects to send another order out to its handbag factory for Petra bags soon, and those bags will be delivered to Everlane customers in February or March. He doesn’t think he will order many more than 1,000. “We would rather be safe than sorry,” he said. “We will still keep it to small runs until we really know that we have pent-up demand.”