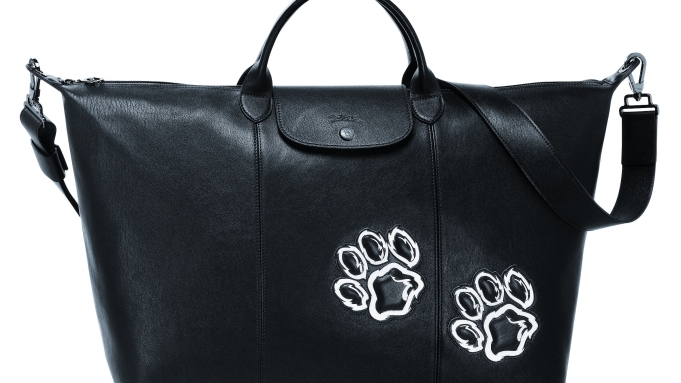 HONG KONG — The immensely popular Chinese influencer Mr. Bags has worked with many luxury designer brands from Tod’s to Givenchy but Dec. 22 marks a first — the launch of a special Longchamp collaboration that will be made available not just to fans in China but all over the world, and will be the debut of the fashion blogger’s products offline.

The collection showcases his spin on the Le Pliage Cuir styles. Mr. Bags, whose real name is Tao Liang, reinterpreted Longchamp’s signature foldable bag in luxurious lamb leather, giving it a slightly more structured feel, and added a playful signature–a pair of paw prints in a nod to the upcoming Chinese year of the dog. The capsule also marks the beginning of a series of projects to celebrate the French label’s 70th anniversary.

He added: “Plus, every time I went abroad to Europe or the U.S., I ran into so many people who would recognize me or come up for selfies, especially in cities like Milan, Paris, London and New York.”

Liang currently has 3.2 million followers on Weibo and over 800,000 on WeChat.

Aside from the Chinese diaspora, China has a growing appetite for travel with outbound trips forecasted to reach 200 million by the year 2020, according to CLSA. While the percentage of trip spend is declining in relation to other activities such as sightseeing and dining, the segment is still a rising and dominant force in retail. A case in point: this year Chinese shoppers became the highest-spending customer segment at the London luxury department store Harrods, ousting British shoppers from the top spot.

The Mr. Bags products will be released in several waves. “Bagfans” as his base is known, will have early access to purchase the collection on Dec. 22 on WeChat. Then on Dec. 31, Mr. Bags and Longchamp are holding a New Year’s Eve party at the brand’s flagship boutique in Shanghai’s Kerry Centre with a select number of bags for sale there. On Jan. 1, the final phase of bags will be offered in key Longchamp stores worldwide.

The design for the large tote features an added zippered pocket at the back of the bag to hold a phone and travel documents. While the small tote is available in black with the prints outlined in white, and in two more feminine shades: pastel pink and powder blue — with the prints in white fur. It also exists in clutch format, which can be attached to the outside of a bag like a charm or carried separately.

The exact production numbers are still being finalized — Mr. Bags collaborations are known to sell out in minutes — but this collaboration will have a slightly higher number of units made to cater for global demand. That being said, no more than 400 units per style will be made worldwide, with a maximum of 250 units allocated to China for every style.