The new bag, debuting June 26, will be stocked in 13 countries worldwide.

A frequent collaborator with the Italian house, Liang has once again added his own unique touch to the accessory brand’s classic design in the form of a unicorn charm and a blue and white colorway. The unicorn is intended to signify good luck and awaken the inner child; a recurring theme for many of Liang’s previous bag designs.

“The color combination is actually a very classic Mr. Bags mix, with different shades of blue and white. This color combination is young and perfect for the summer time. The size of the bag is very petite, but the bag is big enough to keep all the daily essentials, like your iPhone, your card case, your remote charger and more,” Liang said.

The bag will retail at 14,900 rmb, or $2,156 at current exchange. The item will be sold on Mr. Bag’s WeChat Mini Program, Tod’s WeChat Mini Program and the company’s official web site, as well as being available off-line in stores across mainland China, Hong Kong, Macau, and Taiwan.

The design will also be sold internationally, at stores in Australia, Singapore, South Korea, Japan, Malaysia, France, U.K., Spain, Italy, Austria, Germany, and the U.S.; countries which are popular draws for Chinese travelers. 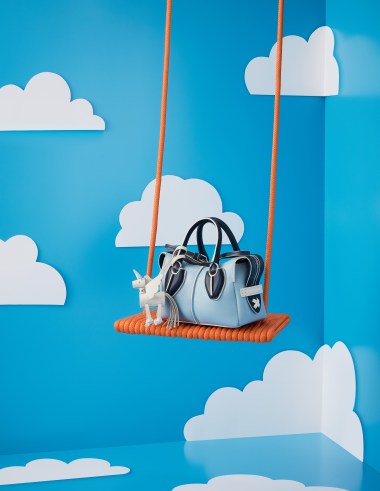 Last June, the popular KOL, with more than 6 million followers on Weibo and WeChat, shifted 300 units of his Mr. Bags x Tod’s limited-edition micro wave backpacks on his WeChat Mini Program, Baoshop, within six minutes. All payments were completed within one hour, totaling 3.24 million rmb, or $468,900 at current exchange.

This year, Liang is hoping to beat his record and is launching 266 unicorn bags on Baoshop on June 26, his birthday, which has become somewhat of a tradition for Mr. Bags and Tod’s collaborations.

Liang sees it as a gift to himself and his “bag fans” on his special day. The total number of units making up the limited-edition collection is still to be confirmed, but the run will be less than 500.

Liang’s army of bag fans are predominantly Millennial women living in top-tier cities across China, with rising disposable income, as well as increased access to information and exposure to Western brands. Tod’s long-term partnership with the homegrown KOL is a strategic move to keep the brand relevant to Chinese Millennials with big spending potential.

“One of the reasons is the way [brands] engage with the consumers, especially Millennials and their use of digital campaigns and digital marketing. It is also the collection they have and whether that collection is appealing to those young consumers. I think it also has to do as well with all the events and all the campaigns and KOLs that they use,” said Bruno Lannes, partner at Bain & Co. and author of the report.

Last month, Tod’s SpA reported a drop in first-quarter revenue, but in remarks made on the earnings call, chief financial officer Emilio Macellari singled out China, Hong Kong and Macau for their “positive results.” The company reported single-digit declining sales in all geographic markets, apart from Greater China, where sales rose by 3.1 percent on the previous year.