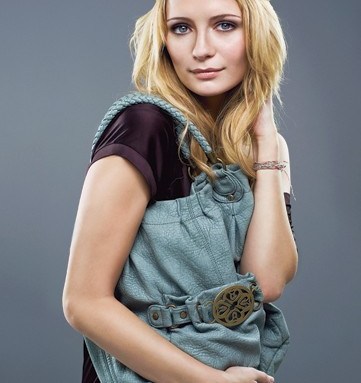 Despite hard times, celebrity collections just keep on coming. Those of actress Mischa Barton are cases in point. She’s launching a headband line for Stacey Lapidus and already has a handbag collection for the London-based Ri2k, now in its third season, which is sold in England and Australia.

Mischa Barton is keen on accessories. In fact, the 22-year-old actress, who made her name as the teen temptress Marissa Cooper on Fox’s “The O.C.,” now has two collections of them: one, a headband line for Stacey Lapidus, being launched for holiday, the other a bag line for the London-based Ri2k, which is sold in the U.K. and Australia. Barton also has two upcoming films. She plays a popular student in “Assassination of a High School President,” due out in March, and a reporter in “Bhopal: A Prayer for Rain,” about a chemical disaster in India that claimed 10,000 lives.

The headband venture came about when, earlier this year, Lapidus spotted photographs of Barton wearing one across her forehead à la Axl Rose. This convinced the designer, a former accessories editor at Vanity Fair, that a collaboration could work. “She’s definitely known for being bohemian and for her hippie look, but then you will turn a page and see her in head-to-toe Chanel,” says Lapidus of Barton. “I tried to put both the bohemian and the classic into the collection.”

The Mischa Barton for Stacey Lapidus line consists of six pieces for holiday decorated with pearls, beads, crystals, sequins and flowers. One standout is a silk, crystal and pearl upside-down tiara intended to be worn on the forehead. Priced from $80 to $200, the Barton pieces initially will be sold at staceylapidus.com, but Lapidus plans to expand distribution to boutiques that sell her signature line.

Barton’s first accessories venture, Mischa Barton Handbags for the London-based company Ri2k, is now in its third season. For fall ’09, Barton plans to work a Seventies vibe. “Even though I’ve always taken a page from vintage bags that I have and love, I think now I’ll be able to push that a little bit further and do more in terms of embellishment and embroidery,” Barton says. “Now I really feel like I have their confidence in me. People want to see that you can deliver and do, like, a good job.”