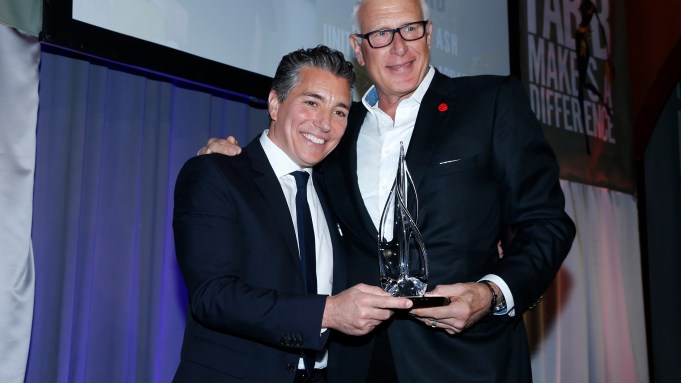 Though she didn’t make it in person, nonagenarian Iris Apfel was true to form at Wednesday’s FABB gala, appearing by webcast in her signature oversize eyewear and parceling out a few witty one-liners.

“Please eat, drink and be merry and live each day as if it were your last. One day you will be right,” Apfel told the crowd.

The fashion legend received the “Icon Award” at the Fashion Accessories Benefit Ball and spoke nostalgically about her husband who at age 101 recently passed away, and her mother. “She taught me that accessories are the most transformative thing in fashion.”

Apfel kept her acceptance speech succinct for the crowd of 700 at Chelsea Piers. The event raised $600,000 for the HBC Foundation,  which supports mental health programs and was launched by Hudson’s Bay Co., and K.I.D.S. Fashion Delivers, which donates clothes to needy children.

In contrast, Isaac Ash, of United Legwear & Apparel Co., spoke for approximately 25 minutes on a range of subjects from his first business meeting with Puma, to his family and business philosophy.

“This is a moment to forget all that is bad and just be good for a few beautiful hours,” said jewelry designer R.J. Graziano. “We’re all still very cautious, but we’re optimistic and want to come out and celebrate,” added Susan Garland, executive director of FABB.

Handbag designer Danielle DiFerdinando gave her prescription for selling handbags in today’s tough retail climate. “Make it whimsical, kitschy, playful. It has have an emotional connection to the consumer.” And Andrew Philip, a headhunter and a former top official at Shiseido and Trifari Monet, told WWD that in contrast to accessories, “Women are buying more and more cosmetics. But accessories is still a gigantic industry. It’s still strong.”