Fendi Peekaboo Pop-up at Harrods Takes Luxe to the Street

Coffee, skateboards and exotic skins are all in the mix at the temporary shop.

By Samantha Conti
with contributions from Fiona Ma
on July 1, 2019

LONDON — Fendi has given new meaning to a coffee and baguette takeaway with a summer pop-up at Harrods known as #FendiPeekabooBar, a mix of luxury, street, Italian food and drink.

Two cafés, one on the ground floor and one on the fifth, offer FF-branded cappuccino and espresso, while a Baguette bar serves up different versions of the bag, some miniature, others with sequins and others that resemble the ones that Carrie Bradshaw carried in “Sex and the City.”

There’s a station for customizing mini Peekaboo bags, some in exotic skins, others in leather, with different handles, straps, cases and names. It is the first time that Fendi has offered customizable Peekaboos, and the brand said it will turn the bags around in two days. 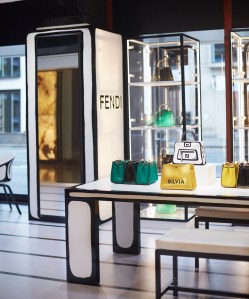 In an interview, Vides said he looked to the Fendi archives and to Karl Lagerfeld’s sketches from the Seventies and Nineties to reimagine the space in his signature 2-D marker style.

“I was more interested in the Karl Lagerfeld sketches from the late Seventies and Eighties: His hand-drawn sketches were crazy to see, and it was about paying attention to his line work and finding similarities to transfer that into the products,” said Vides, adding that he wanted to add a product line into the space to tie everything together. 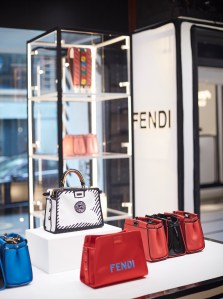 He illustrated a Peekaboo bag and also kept his current fan base happy, introducing skateboard decks with the Fendi monogram painted on the bottom. He also dreamed up FF-monogrammed ceramic plates and coffee cups which are for purchase and for decoration in the café area. The shop opened Monday and will run for the month of July.

“It was a struggle to get everything produced on time,” he said. “Our biggest fight was just timing and working from imagination and specs. I couldn’t just go in and paint like I would usually do, so Harrods was instead sending me dimensions of the space and I had to work from that,” he said.

It was all worth it in the end. Vides said working for a fashion house as grand as Fendi was an unmissable opportunity. “I was walking on eggshells because I wanted it to be perfect. When you work with a fashion house like Fendi, you have one chance to get it right.”