The shoulder jewel that helped ignite the luxury handbag craze is back in the spotlight with several limited editions. 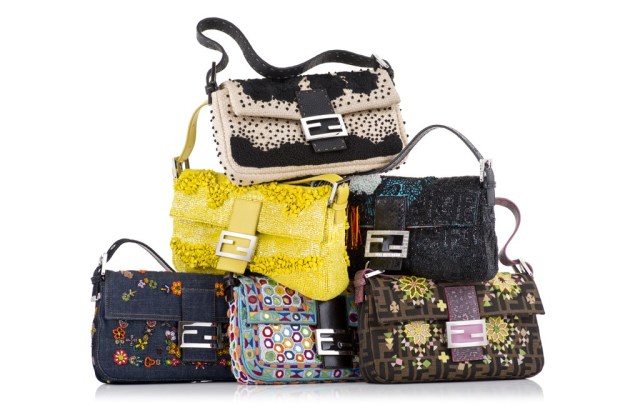 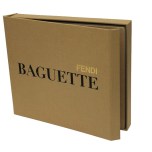 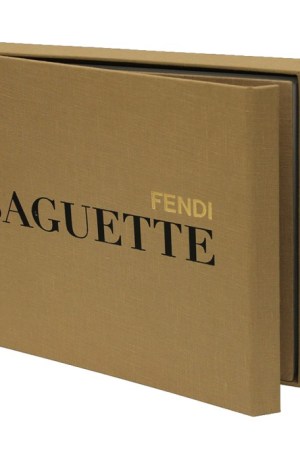 A Look Into Accessories Label Iuri

Fendi’s Baguette — the shoulder jewel that helped ignite the luxury handbag craze and propelled a bidding war for the Roman house — is back in the spotlight. Next month will see the launch of a 345-page Rizzoli tome chronicling the Baguette’s history, and limited editions of six of the bag’s most famous iterations are slated to arrive in Fendi boutiques worldwide, followed by a series of in-store events.

The initiatives, marking the bag’s 15th birthday, also signal a strategic thrust for the company, where new chairman and chief executive officer Pietro Beccari is putting Fendi’s iconic products at the forefront of development. The move echoes some of the work he did in his previous role as executive vice president at Louis Vuitton, where a Core Values ad campaign lit a flame under Vuitton’s historic monogram leather goods.

“In this time of a quick-changing, fast-paced world, it is important to remain close to one’s roots and values. The Baguette represents the perfect expression of this and of Fendi’s DNA,” Beccari told WWD in an exclusive interview, his first since joining Fendi in February. “It’s probably true that the Baguette was the bag that invented a fashion for bags and probably initiated the so-called ‘It’ bag phenomenon. But thanks to its unique shape that embodies the whole history of a maison, the Baguette has evolved into a timeless piece.”

Although Beccari declined to talk numbers, market sources estimate Fendi has already sold close to a million units of the slim-lined purse, small enough to tuck under the arm like a loaf of French bread. Fendi Baguette bags retail from about $1,000 up to $3,000 and more.

“It was very spontaneous. There was no marketing plan around this bag,” Silvia Venturini Fendi recalled about her 1997 invention, characterizing it as a reaction to minimalism. At the time, she recalled that handbags were mainly functional objects, frequently black and often “boring.”

“They were treated like accessories and very separate from fashion. You didn’t see many bags on the runway, only in the showrooms,” she said.

In 1999, LVMH Moët Hennessy Louis Vuitton and Prada teamed at the height of the luxury acquisitions boom to take a 51 percent stake in Fendi, valuing the company at $950 million. In 2001, LVMH bought Prada’s 25.5 percent holding for about $260 million and has subsequently bought out all minority shareholders.

Beccari noted that Fendi never stopped selling the Baguette, and has since turned out more than 1,000 versions of the style, in materials ranging from fur and sequins to crocodile skin. The reeditions include a denim style embroidered with flowers, and another pavéd in colorful embroideries and small mirrors.
He credits the handbag’s diversity for its longevity.

“The fashion world is right now saturated and bombarded by real or presumed ‘It’ bags,” he said. “But for a long time, the Baguette has abolished the ‘fashionable’ handbag convention, the one that provided the same handbag for everyone, a coveted object to be flaunted in its uniformity.”

To be sure, the “It” bag phenomenon — exemplified by the Baguette — has waned in recent years, industry observers agreed.

Pamela Golbin, chief fashion curator of fashion and textiles at Les Arts Décoratifs in Paris, said the trend was a reaction to the minimalist fashions pioneered by Belgian designers and Austrian Helmut Lang as the millennium approached. “There was no decorative embellishment. It was the perfect time for accessories to become the central part of the wardrobe,” she explained.

Today, “there’s more of a balance between accessories and clothes,” she stressed, characterizing the handbag as a “very desirable object,” but without the hysteria that once engulfed it.

According to Robert Burke, president and ceo of consultancy Robert Burke Associates in New York, shoes supplanted handbags as an obsessional focus in recent years, possibly because they are less expensive amidst ongoing economic turmoil. In handbags, consumers have been gravitating toward quieter styles “with a little more longevity,” Burke said, noting that, “Hermès hasn’t suffered during the economic crisis.”

Burke stressed that there are pitfalls to “It” bags, principally the risk of demand withering once the market becomes saturated.

“When an ‘It’ runs out, it can come to a screeching halt.…Growing strategic businesses in prudent ways is probably where brands are leaning more today,” he said. “I would rather have a brand with a strong category of business rather than an ‘It.’”

Burke cited Celine, Givenchy and Valentino among European brands that have done a good job building a solid accessories business, and placing limits on distribution.

According to sources, top luxury players like Chanel tightly control quantities of their most in-demand handbags so as to not  endanger their coveted status.

For his part, Beccari stressed that, “Fendi wants to go for a less compulsive and feverish consumption.”

Venturini Fendi recalled that she approached the Baguette bag like the Roman house does its furs: with an eye to high craftsmanship, surprising techniques and being “a bit subversive.”

She attributes the success of the Baguette to multiple factors. Its short strap and diminutive size were counterintuitive to the functional, even ergonomic approach of what was on the market in the Nineties. The fact that it came with a multitude of embellishments was a welcome reprieve from the monotony and uniform nature of fashion then. “We were all dressed like black spiders,” Venturini Fendi recalled.

“Fendi was small at the time. You couldn’t find the bag so easily and that made it precious. It started to become like a fever,” Venturini Fendi explained. “I always say: It was the right bag at the right moment.’”

The Baguette also foreshadowed the use of celebrities as marketing vehicles for leather goods, although Venturini Fendi insisted all of its famous devotees came calling, not the other way around. Among the first was Madonna, snapping up several Baguettes at the Rome shop. Then came a call from Patricia Field, who asked if she could borrow some for Sarah Jessica Parker’s new series, “Sex and the City.”

“It’s like a marketing case study, but really it wasn’t,” Venturini Fendi marveled.

Parker, among contributors to the Rizzoli tome, notes that Fendi was the first big design house to loan the show items for her character. “It really opened the floodgates and influenced the story line — especially Carrie’s habit of spending more on fashion than her home,” she writes. “Once Fendi loaned us items, everyone was more willing to do so, which helped us dramatically in conveying Carrie’s decadence.”

Asked if the “It” bag phenomenon still persists, Venturini Fendi said she detects an almost opposite trend.

“We have seen so many bags, so many companies that weren’t leather goods specialists making bags,” she said in an interview. “I think everyone was trying —sometimes too hard — to do ‘It’ bags.”

The consequence? “We want real bags again. We’re going back to leather,” said Venturini Fendi, noting this impulse yielded the Peekaboo bag, a discreet framed handbag she likes best in hand-stitched Selleria leather. “I think we are in a moment where we want simple or very, very high design…the most exquisite leather…or something surprising, colorful, crazy and different.”

To that end, Fendi in 2008 mounted a design competition in Asia called “Design Your Dream Baguette” and commissioned one-off versions from famous artists, including Jeff Koons, Damien Hirst and Richard Prince, that were auctioned off for charity.

“I’m not so obsessed by the next ‘It’ bag,” said Venturini Fendi. “I just want to follow the same path: doing things with freedom, and experimenting a lot. It’s the only good recipe.”