Highlights from Accessories the Show and ENK’s Accessorie Circuit. 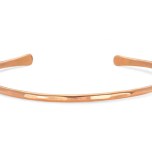 NEW YORK — New designers and first-time vendors shined at the May trade shows.

At Accessories the Show, held May 4 to 6 at the Javits Center here, Tel Aviv-based designer Avigail Adam stood out with her botanical garden-themed booth and ethereal Greek-inspired headpieces. “It’s going really great — surprisingly well,” said Adam. “I got an order today from the Getty Museum.”

Adam explained the inspiration behind her signature piece, a half-crown Greek goddess headband, done in various leaf motifs. “I have a degree in archaeology,” she said. “I studied classical times, Greek, Roman, Egypt.” Adam’s headpieces are created in Tel Aviv, with some soldering techniques done in New York, and retail starting at $30.

Despite being based in Brooklyn, Enrique Muthuan was also making his first appearance at the show. “The morning is always slow, so I’m not worried,” he said. With wholesale prices on the higher end of the sales spectrum (wholesale prices start at $105), sales had been slow to build, with buyer interest perking up post-lunch. “They like everything we have,” said Muthuan, noting that interest had been particularly high towards long, beaded necklaces meant to be layered.

Over at Pier 92, ENK’s Accessorie Circuit, held May 5 to 7, offered new designers space in the centrally located “Fresh” section. Among the first-time vendors was Beau & Ro, a New York-based line of convertible clutches, launched by designer Sara Rossi in December 2013. “So many people have been sending in photos of where they’re wearing them,” said Rossi of the fanny pack-esque bags. “It’s become a little bit of the essence of the brand.”

Rossi started the line with the intention of creating the perfect convenient bag for music festivals, such as Coachella. The response, however, has launched the pieces into unexpected territories.

“New moms are loving them,” said Rossi. “I had my biggest order from these sports stores in Dallas and Austin. Two buyers from a pro shop just stopped by and were like, ‘Oh, this is perfect for golf.’”

Phyllis + Rosie, a New York-based jewelry line launched in February, saw incredible response within their first 24 hours on the trade-show scene. “Free People came over and were like, ‘Want to do a partnership?’ So that’s mind blowing,” said designer Alana Blank. “We had a Vancouver conglomerate make a $20,000 order immediately,” added Rachel Lavipour, chief operating officer. “We’re freaking out.” The duo had seen widespread interest in their adjustable cuffs. “We’re doing a hammered metals look, but not in a craft way,” explained Blank. “It’s artistic and distinct.”