During his upcoming fall show, the designer will unveil some key pieces from the first collection. 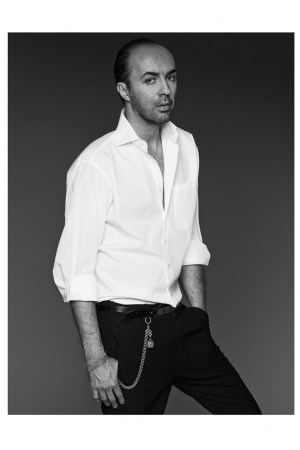 MILAN — Francesco Scognamiglio plans to unveil an accessories line as he sets plans to grow globally.

During his upcoming fall runway show, to be held in Milan on Feb. 25, the Neapolitan designer will unveil some key pieces of his first accessories collection, which includes bags, as well as custom jewelry.

“This is the first step in the brand’s merchandising evolution,” said the designer, who established his label in 2000 and last year decided to go solo by closing his apparel licensing agreement with Italian manufacturing company Kabi. Scognamiglio’s first signature bag will be an oval-shaped style in polished calfskin for day, which also will be available in a mini version with a strap. In addition, the collection will include an evening clutch “made of metallic spheres,” the designer said.

To further expand his product offer, Scognamiglio teamed up with shoe designer Gianvito Rossi to launch a footwear collection for the fall.

The designer is also aiming to introduce a couture collection next year.

“I’d like to organize a small, intimate event in Paris next January to present super-exclusive products,” said Scognamiglio, who already has a long list of private clients — including celebrities such as Cate Blanchett, Madonna, Beyoncé and Jessica Chastain — ordering customized dresses for special events.

“We are also working on a retail project,” said the designer, who plans to open his first flagship in Milan in 2016. “It won’t be in the Golden Triangle because there are no real estate options fitting my needs,” he added, without elaborating on the location.

In order to fund the expansion, the designer revealed he is considering taking on an investor. “It might be a big bank or a luxury group, which may develop a project with me to help grow my company,” he said.

Scognamiglio is looking at expanding his business in Japan, China, Korea and the Middle East, “countries where my brand image is already quite strong,” he said. Before the crisis hit Russia last year, the area was the designer’s main market.

The designer also has high hopes of breaking into American department stores with his fall collection. “I already sell in relevant boutiques in the United States, including Curve in New York and L.A., but finally entering the department stores would mark a big step for my label,” he said.