Freitag Bags: From Trucks to Luxe

The Zurich-based company known for working with recycled industrial tarpaulins has opened its first store in the U.S. 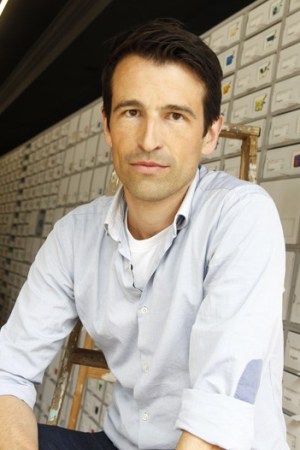 Graphic design student Markus Freitag couldn’t find a messenger bag to carry his sketches in all of Zurich. Then one night, while looking out his kitchen window at the freeway below, he saw trucks, their payloads covered with colorful tarpaulins. It was one of those aha moments, with Freitag trying to turn the sturdy, weather-treated and recycled tarps into bags. That was 1993. Today, Freitag sells 300,000 bags a year. The company has grown an average of 20 to 30 percent annually, Freitag said, declining to discuss sales volume.

Success didn’t come easy at first, however. Freitag and his brother Daniel, also a designer, cleaned the tarp in their bathtub and sewed the bags by hand, hawking the finished product on the Hardbrücke in Zurich.

Freitag bags are cut by hand from tarps that have seen thousands of miles of highway action. The company employs four “truckspotters” with keen eyes for spotting interesting tarp and strong negotiating skills, since the trucking companies are paid for the material. All of the washing, cutting and sewing is done in a Zurich manufacturing facility not far from the cross-city highway that inspired the bags.

Freitag on Thursday opened its first U.S. store, at 1 Prince Street and Bowery in Manhattan, directly opposite the New Museum. “I like the neighborhood,” Freitag said. “It’s very fun and there’s art collections. The people buying Freitag are creative people, artists.”

The Prince Street store, like other Freitag units in Berlin, Hamburg and Cologne in Germany, and Zurich and Davos in Switzerland, is outfitted with a prize-winning storage system that lines the walls. Aside from a display table holding five messenger bags, all of the inventory is kept in 1,000 bins. On the front of each bin is an illustration of the bag it holds. The tarpaulins resemble leather when weathered. There are dozens of designs, but no two are the same exact color.

The Freitags in 2006 worked with recycled materials again when they built their store in Zurich entirely from rusty freight containers. The store consists of a nine-story tower of containers — gutted, cleaned and piled high.

The Freitags have developed more than 70 styles, divided into two collections, that sell in 300 shops around the world and at freitag.com. The Fundamental collection is the basic series of messenger bags with car seat belts for straps and Velcro closures. The Reference collection features bags named after famous journalists, writers and poets. For example, the R504 Clemens is a tribute to Samuel Clemens and the R105 Becker is named for Lydia Becker, a 19th-century English journalist.

From utilitarian messenger bags such as the F13 Top Cat for $296 and the compact F48 Hazzard, $432, Freitag is moving closer toward fashion. R106 Hind, $802, one in a series of handbags that look like snakeskin, is made from small punched-out pieces of tarp that are woven together.

An iconic Freitag messenger bag is in the permanent design collection of the Museum of Modern Art. “I was visiting my bag yesterday,” Markus Freitag said. “It’s been in the collection since 2001.” Freitag’s first prototype is on display at the Design Museum of Zurich.