Fun and Games With Anya Hindmarch and Belstaff

Both brands went on a charm offensive during London Fashion Week, each staging evocative presentations. 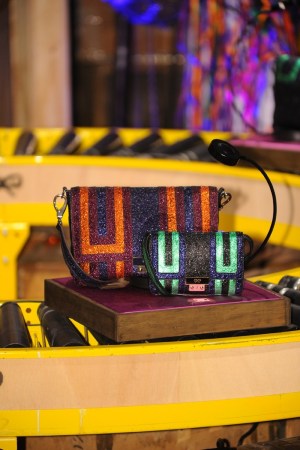 Hindmarch concocted a Willy Wonka-ish funfair on Tuesday that featured singing and dancing bags, along with carnival rides festooned with accessories. Inspired by the colored foil wrappers on English Quality Street candies, as well as a childhood spent peering through the toy-shop window, the multicolored glittery bags — which had been mechanized for the show — came rolling out on a conveyor belt singing, shimmying and shaking their long zipper fringes. Platform heels tapped along to the booming Broadway show tunes playing in the background, while additional bags whizzed around on a wooden Ferris wheel. “Other handbag brands seem rather dull by comparison,” said the cheeky Hindmarch in the show notes. At the end of the spectacle, a curtain parted to reveal the designer furiously pedaling a stationary bike as if the whole show ran on her steam alone — which, in essence, it did.

Over the weekend, Belstaff made its debut as a luxury brand in a more tranquil environment featuring grass, pebbles and glass cases filled with looks from its new collection. The house was founded in Staffordshire, in the English Midlands, in 1924, and it quickly became known for its waxed-cotton fabric jackets for motorcycle enthusiasts. The company later evolved into the go-to brand for bikers, aviators and sporty, outdoorsy types who fell in love with Belstaff’s performance fabrics.

At the presentation, models wore looks such as a suede shirtdress styled with a cropped python jacket, a burgundy shift dress with chain detailing on the collar and a shearling coat with a collar latch echoing the brand’s signature Roadmaster jacket. Speaking of Roadmasters, they were out in force — in waxed cotton, leather and crocodile. The strong outerwear-heavy collection should rapidly build a luxury-loving fan base.