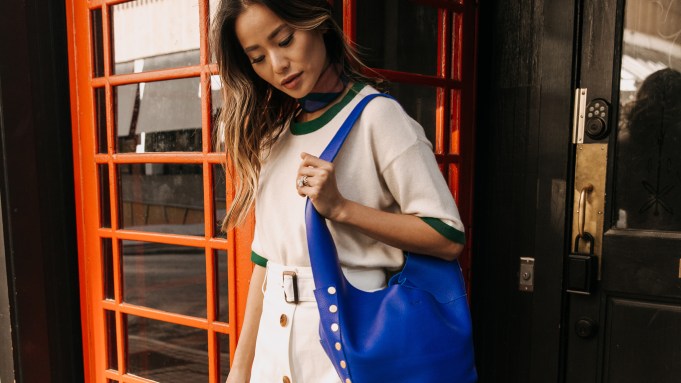 Hammitt, the 10-year-old Hermosa Beach, Calif.-based handbag line, has teamed with actress Jamie Chung on a capsule collection for spring. She will also become the brand ambassador and appear in the advertising.

“Jamie so embodies the energy and drive of the woman who loves our brand,” said Tony Drockton, founder and chief cheerleader (stated on his business card) of Hammitt, on a visit to New York.

Chung inspired the line and helped select color palettes and silhouettes for the four-piece capsule.

“Hammitt is a California brand that I vibe with,” Chung said. “I also love their sense of community and their commitment to giving back.” Among Hammitt’s community initiatives are supporting local education, providing bags for nonprofit auctions and initiating beach cleanups.

Hammitt is known for its buttery soft leathers that are designed in Los Angeles and manufactured in Asia. The company sells to 800 retailers and has grown 40 percent a year for the last five years. Among the brand’s accounts are Dillard’s, Von Maur, Montage Resorts, Four Seasons, Phoenician Hotel and Joan Shepp. The brand’s web site has increased 200 percent year-over-year, and the company’s sales with Zappos have expanded 120 percent year-over-year, Drockton said.

The Jamie Chung collection consists of four styles: The Tom shoulder bag, an unlined hobo bag in capri that’s designed with soft, comfortable leather ($495); the Mr. G bag, named after Chung’s husband, Bryan Greenberg, which is a shoulder bag featuring various shades of denim blue patchwork and leather detailing ($495); The Charles Belt Bag, which can be attached to any belt and comes in rattlesnake and pebble leather, in white and brushed gold hardware ($395), and the VIP bag, which is Hammitt’s most popular clutch and converts into a cross-body bag ($260). The bag features suede lining, two large zipper compartments, an exterior cell phone pocket and embossed rivet detailing in a pewter color. The bags will be available starting Feb. 1 on Hammitt.com, and other stores and resort shops. There are less than 100 of each style.

Accompanying the capsule launch is an ad campaign shot by Myles Berrio in Atlanta. Campaign images will begin appearing Feb. 1 online and on Chung’s social media channels, including Instagram, where she has 1.3 million followers.

Discussing the competitive handbag landscape, Drockton said, “The last three years have been the most challenging times for some of the larger handbag brands and accessories brands, and we flourished. I’m always competing with ourselves to do better.” Celebrities who have worn Hammitt include Angelina Jolie, Ashley Tisdale, Candace Cameron Bure, Jamie King and Beyoncé.

The company does everything in-house such as design and graphics and has a full-time fulfillment center. “In order to really deliver consistency, you have to bring as much as you can in-house,” Drockton said.

Drockton, who employs 23 people, said he has no interest in selling to a larger company. “If we keep doing the same thing for the next 10 years, we’re probably going to be a brand to be reckoned with,” he said.

Joan Shepp, president of her eponymous women’s luxury boutique in Philadelphia, said about Hammitt, “The line is great. If he [Drockton] comes to visit, he’s so personable and so much fun. His bag is the first bag I ever had that has compartments for everything I use. There’s a place for the phone outside on the back, and there are places for everything. I haven’t met too many people who are as enthusiastic about what they’re doing. He always tries something new and is open. And they’re not a thousand dollars.

“I’m emotionally connected to my retailing partners,” Drockton said. “I know how difficult it is to consistently provide a brand to the customer over a long period of time….It took 10 years for us to build trust through all the channels. You can lose it in a season. My commitment is to look at everyone as a true partner,” he said, including the customer.

Drockton said he plans to have collaborations with multiple celebrities going forward. “We’re ready to fly,” he said.