LOS ANGELES — Hammitt founder Tony Drockton told himself one day he was going to open a store at South Coast Plaza. This month he did.

The 1,100-square-foot boutique marks the Hermosa Beach accessories brand’s first store as it turns its attention to the direct channel and international waters.

“It’s a dream come true for me personally,” Drockton said of the store, near Apple and Lululemon at the Costa Mesa shopping center. “South Coast Plaza — that’s where Hermès has a flagship. Louis Vuitton. The European luxury brands are the brands I look up to not just for their product, but their business model of how they put quality and design first, which makes the customer love that brand over the long haul.”

It was time for a store, considering the 11-year-old brand’s wholesale footprint of more than 800 retailers in the U.S., a capital raise last year and the installation of Andrew Forbes, former Jimmy Choo chief operating officer and chief executive officer of Taryn Rose International, as Hammitt’s ceo a little less than two years ago. 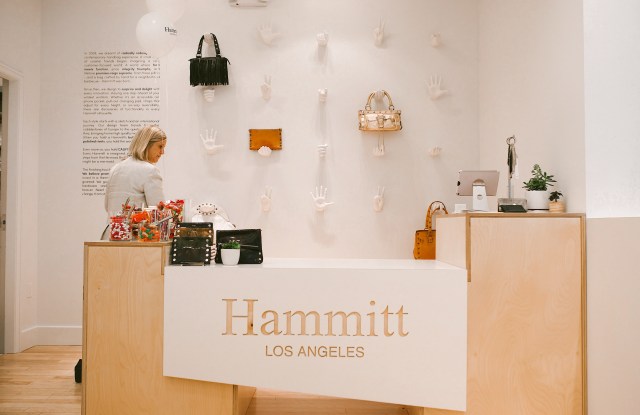 “We’ve successfully been able to build our distribution first with specialty stores around the country. Then we rolled out our first chain stores and then we layered on top department stores,” Drockton said. “After that, we focused on our online, which was hammitt.com and Zappos as a partner. Since all of those distribution channels were all doing so well, to me, the next progression was opening up our own store, which allows us to control the entire retail experience with the customer.”

Hammitt built a name for itself with contemporary bags that were just as much about utility as they were looks and upscale materials. In other words, soft leathers and standout hardware meets cell-phone pockets and reversible straps. Hammitt, in its first five years in business, made all product in Southern California. As the business grew, production later moved to Asia, with design work continuing out of the company’s Hermosa headquarters, where it also handles all repairs and fulfillment. The company has a lifetime warranty on its products with a no-questions-asked policy.

Drockton said he sees more Hammitt stores in the future.

“We’ll learn at South Coast what’s working, what’s not working between the merchandise, the staffing, the activations around it,” he said. “Then we’ll take that and roll that out in other markets. But my belief is the retail store does have to be profitable. I’m not a believer that these [stores] are billboards and that they just build the brand. I think that’s part of retail, but if the store is not profitable, then why do it? I would rather allow my wholesale retailing partners to continue to grow.” 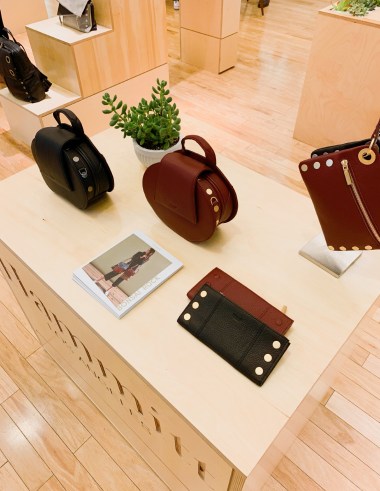 That’s been the case for at least the last five years where the wholesale channel has seen 30 percent growth each year, Drockton reported.

The company next year will turn its attention to growing the international wholesale business. One reason it hasn’t gone overseas yet is Drockton is focused on setting pricing to ensure consumers see consistency across distribution points, but also are confident that what they’re buying is a real Hammitt.

To ensure that continues overseas, the company is looking at NFC (near field communication) technology that would allow the tracking of product.

Part of the push is occurring under the leadership of Forbes, who has helped accelerate the business plans, Drockton said. With Forbes’ appointment to ceo, Drockton took the chairman position and also title of chief cheerleader, charged with maintaining the brand’s vision.

The company under Forbes has slimmed down its stock-keeping units into fewer, but more impactful pieces, Drockton said. There has also been a greater push on the marketing side with events and collaborations with influencers, such as the naming of Jamie Chung to brand ambassador earlier in the year. All the while, online revenue doubled year-over-year in the past year with second-year comparables still growing between 50 and 60 percent.