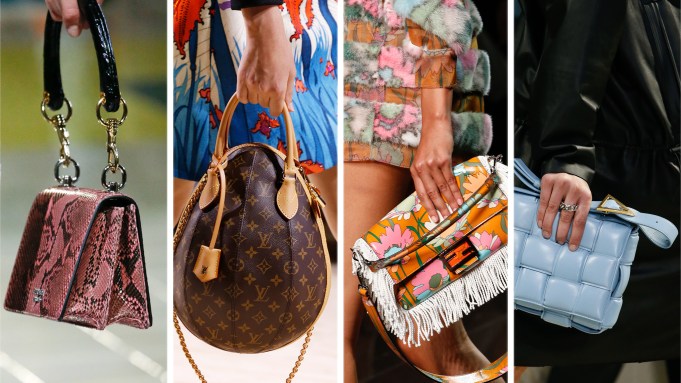 The status bag, the shining star of the handbag category, had its golden period in the Aughts. Names like the Paddington, the Muse, the Saddle bag or the Motorcycle bag were part of a trend for an “It” bag of the moment.

Now, more than a decade later, the idea of one bag having it all has dimmed. According to an October report from The NPD Group, the handbag business is down 20 percent in the first eight months of 2019, compared to 2016.

Using the amount of bags on the spring runways as an indicator, the category is still a key driver of business and buzz for brands, but the entry points have expanded over the last five years. The rise of the resale market — where prestige names like Chanel and Hermès, two brands that sit atop the status food chain, can be bought at reduced prices — is beginning to chip away at market share. New brands are building buzz on social media and offer an entry-level contemporary price.

“The ability to have multiple avenues is changing the landscape,” said Lisa Aiken, fashion director at Moda Operandi. “Many brands came out of the direct-to-consumer model, which can be quite powerful and build longevity as the brand is able to control its scarcity. So, for a new brand, entertaining that concept can be interesting, but it limits growth if held onto it for too long. Ultimately, it can become difficult to sustain and gain momentum versus more traditional models. Resale is yet another interesting facet. It gives customers the confidence to invest in designer as it holds value for longer.”

Consumers’ attitudes about the resale market have shifted. Once the favorite of thrifty college students and hipsters, the resale accessories market now offers a buy-in on luxury handbags with marquee names that telegraph a level of social capital.

The digital native luxury retailer, a privately held company, also has a nascent brick-and-mortar footprint. In June, the company opened its largest store yet, in Miami, at 2,800 square feet.

Gorra said at resale, Hermès, Chanel and Louis Vuitton rule the roost, as they account for more than half of the market. He calls them “collectibles,” noting that some styles can often go for higher amounts at resale than a new-to-retail style.

The company has launched a subscription program, Rebag Infinity, where die-hard bag lovers can every few months swap out bags they bought on the site. The program allows shoppers to resell bags within six months of purchase for a guaranteed 70 percent of the original price. The credit is applied toward their next purchase with Rebag.

While Gorra, who had a brief stint in business development at Rent the Runway before launching his company in 2014, wouldn’t share how many customers use the program, he said in 2020 the strategy is “to make it not a feature, but our core business.”

“We have seen an overwhelming response to Daniel Lee’s Bottega Veneta, along with Prada and Loewe,” Akin said of the luxury brands at Moda that have been performing well.

She added that Bottega Veneta is the retailer’s fastest-selling bag brand, adding that the over $2,000 price “doesn’t deter interest or volume.”

“The best way to run a really successful accessories business is to understand which brands have a really strong offering. And then to put your money into those brands,” explained Jeffery Kalinsky, president and founder of Jeffrey USA, and vice president and designer fashion director of Nordstrom Inc.

Kalinsky said it’s no longer about just one bag shape as “there are all types of shapes that perform well.”

Similar to the resale market, the lion’s share of the category goes to Chanel.

“There is nothing that can compare to the Chanel handbag business. Season after season, year after year, historically a strong business that is a phenomenon,” he said.

Kalinsky noted the luxury category is rounded out by the usual European suspects — naming Saint Laurent, Gucci, Prada and Fendi, with the Celine handbag business “really starting to become more and more important,” noting the Triomphe as an important shape for the brand.

Another game changer is the rise of social media where tags — #purse has 16.9 million tags, #handbags 6.2 million and #itbag 488,000 tags — and “likes” do all the talking. Brands like Wandler, Staud and Cult Gaia, which sit at a more accessible price point, first resonated with consumers on Instagram. But social media can quickly burn through a trend, before it can gain traction at the sales level.

“In recent years, there has been a flush of contemporary bag brands that were able to make their name through social media,” said Aiken. “I believe this trend is slowly going to wind down. Instead, the trend is reversing to the designer level. Ultimately, people are returning to those investment pieces, like a handbag.”

In March, Instagram unveiled Checkout, a feature that lets users shop seamlessly within the app and allows creators to tag specific pieces of clothing, accessories or products, complete with links to purchase. It remains to be seen how this will affect the luxury handbag category.

“There was definitely a mix this past season,” Akien said of preorders placed at Moda after the spring runway shows concluded. “The soft leather clutch resonated with Moda team and our customers — like Loewe’s reintroduction of the Flamenco bag. Bottega Veneta will continue to be a powerhouse in the handbag space.

“The Simone Rocha bag struck a chord with our customers also as it was our best-selling bag from our spring-summer 2020 trunk shows. Another bag of note was Valentino’s Super V. The house has seen success from their take on the logo belt and it is now gaining traction within the handbag category in multiple sizes and color options,” she added.

So even though handbag sales are down overall, at retail there is a renewed focus on brands with a luxury price point. “Perhaps the better phenomenon is the ‘it’ brand,” Kalinsky said.