By Alexandra Steigrad on May 3, 2012
View Slideshow 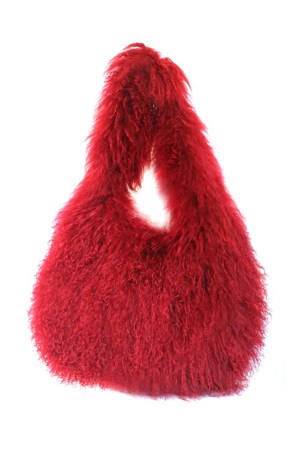 A Look Into Accessories Label Iuri

“The old bag is getting into bags,” laughed Iris Apfel, whose offbeat humor and lightning-quick intellect belies her age.

At 90, the fashionista and “geriatric starlet,” as she likes to call herself, is entering a new phase of her life: handbag designer.

Although Apfel has collaborated on a few bags with HSN, where she has a jewelry line, she has never had her own bag collection until now.

Inspired by her own wardrobe, Apfel has created a collection of exotic handbags, featuring Mongolian lamb, hair calf and snakeskin, which will retail for between $228 and $398.

“It’s well-priced. There’s not much around this price point,” she said. “I’m a great believer that a lot of people on this planet want good design and high quality at a price.”

Based on that exchange, the two came up with the collection’s name, Extinctions.

While the name alone delighted Apfel to no end, the duo wanted to drive home its double meaning by selecting evocative hangtags for the bags. At first, they looked into the image of a dinosaur, but it was “unsightly,” Apfel said, so they settled on a dodo bird.

“It’s an odd bird, like me,” explained Apfel, who noted that her favorite piece, a large, red double-handled bag in Mongolian lamb, is also one of the more distinctive looks.

“I’m a color person. I’ve never been known to play it safe,” she said. “Plus I like big bags. My eyeglasses are so big they don’t fit into smaller bags.”

With 12 styles to choose from in five colors, the collection is set to hit better department stores in October. Nunziata and Apfel are already planning on resort and spring collections for next year, which will include unique fabrications, such as bags incorporating handwoven fabric from France.

But for Apfel, the handbag collection is one of many projects she’s juggling.

For 2013, she has designed a line of sunglasses and optical frames with Eyebobs, ranging from $75 to $99. The collection follows a limited-edition frame that she launched with the company this spring.

When she’s not working on fashion projects, Apfel is mentoring students from the University of Texas who are looking to break into the world of fashion and retail. Apfel is also the subject of Albert Maysles’ latest documentary, which is still in the early stages of filming.

“I’m used to living on the edge of a volcano. I love what I do. My life is my work,” Apfel said. “I have a lot of creative juices — I like to use them up or it chokes me.”